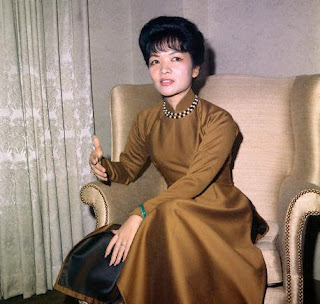 One of the most recognized and certainly one of the most controversial figures in the history of the short-lived Republic of Vietnam (Viet Nam Cong Hoa) was Tran Le Xuan, better known as Madame Nhu, the wife of Ngo Dinh Nhu, the brother of the first Vietnamese President Ngo Dinh Diem and the unofficial "First Lady" of South Vietnam. Aside from her husband, Madame Nhu herself had quite an illustrious ancestry. Her mother was Than Trong Nam Tran who was a daughter of Princess Nhu Phien who was the youngest daughter of H.I.M. Dong Khanh, the ninth Emperor of the Nguyen Dynasty.

She married Ngo Dinh Nhu and converted to Christianity, becoming a zealous Catholic and a very public face for the young South Vietnamese government. Her husband, Ngo Dinh Nhu ran the Can Lao political movement in support of the personalist regime of Diem. Madame Nhu was, in every respect, a fiery and committed woman, which both her friends and her many enemies could agree on. She played a leading role in the moral reform President Diem instituted in South Vietnam, closing down brothels, opium dens and gambling houses. She was at the front of imposing what was known as the "campaign for public morality" on South Vietnam, which included the abolition of divorce, contraceptives and abortion. Nightclubs and ball rooms were also often targets. Even beauty pageants were halted as Madame Nhu believed they simply contributed to the objectification of women. This campaign of decency, while admirable, was met with a great deal of hostility by those who did not share Madame Nhu's view of ethics.

"The Dragon Lady" as she came to be called, was also a passionate anti-communist and was determined that women should play a leading role in defending their country from Communist infiltration. She formed a corps of women warriors and there is a famous photograph of her at their training ground, firing a .38 pistol for the first time. That event sums up a great deal of her character. Having never used a firearm before she was startled by the noise of the first shot. Laughing it off, she vowed that she would not flinch again and fired the remaining five rounds as though she were an expert. She also fostered a renewal of commemorations for the Trung Sisters, the heroic co-Queens of early Viet Nam who fought against Chinese occupation.

Madame Nhu was, like the rest of the Diem clan and most Vietnamese of her background, extremely devoted to her family. In her eyes, her husband was the heart of the Diem regime and could do no wrong. Commenting on the American effort to remove Ngo Dinh Nhu, she said that Diem refused because he knew that, as she said, "my husband could do without him, but he, he could not do without my husband". Ironically it was US agents who had pushed Diem (a lifelong monarchist) to depose the nominal head of state (the former Emperor) and make himself President. In due time they would turn against Diem for behaving more like a monarch himself than a politician. She was also extremely nationalistic and given to speaking her mind as bluntly as possible, which often caused huge public relations problems. The worst case came at the height of Buddhist protests against the Diem administration. Like others, she accused the Buddhists of being infiltrated by the Viet Cong and when a Buddhist monk from Hue burned himself alive in protest, she commented that it was the Buddhist leaders who "barbequed" the monk, and even then, had relied on foreign help as the gasoline used was imported.

Such outbursts, while acceptable to her supporters, outraged many people and caused the United States, which was quickly losing patience with the Diem government, to view Madame Nhu as a "loose canon". When other protests followed she caused another stir by saying, "Let them burn, and we will clap our hands". Finally, America decided to abandon the Diem administration and secretly backed the 1963 coup against him. After being removed from power, Diem was assassinated along with his brother Nhu. Madame Nhu was, at that time, on a tour of the United States giving speeches in support of Vietnam's war against Communism. When hearing of the event and the rumored involvement of the United States she said, "Whoever has the Americans as allies does not need enemies". She went on to predict a dark future for her country, which was sadly to prove all too acurate. With Diem gone, the U.S. was firmly in control of the Vietnam conflict and Madame Nhu retired from public life to Italy.