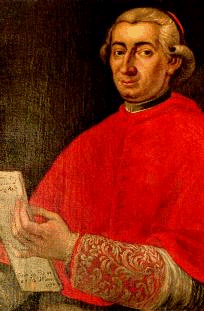 One of southern Italy's great counterrevolutionary heroes was Fabrizio Cardinal Ruffo. The period of the French Revolution was a time of great turmoil, not only for France, but for the rest of Europe as well. Intoxicated by the blood they filled the streets of Paris with, the revolutionary leaders soon began to strike out against every side. One of the first areas to come under attack was the states of Italy. Napoleon Bonaparte conquered and exploited northern Italy and took the aging Pope Pius VI prisoner. However, after 1799 Austrian and Russian troops liberated much of the French puppet state in Italy and a counterrevolutionary uprising broke out in Tuscany, Naples and the Papal States. Liberty Trees went down and the Christian cross went up as devout Italians, following the same heroic example as the French of the Vendee, fought to drive out the French revolutionary forces and restore the freedom of the Church.

This movement came to a head in the formation of the Congregation of the Holy Faith, more commonly known as the Sanfedisti under the leadership of Fabrizio, Cardinal Ruffo. A zealous defender of the Church and traditional authority, Cardinal Ruffo also created a branch within the congregation to face the enemy in battle; the Army of the Holy Faith. They certainly could not have been inspiring in appearance, armed with little more than shotguns and farming tools, but they fought with the fervor of people defending the throne of God. Their army soon swelled from hundreds to thousands to tens of thousands.

With Cardinal Ruffo leading the campaign, the Sanfedisti captured Altamura. Before their arrival, the French had chained together 48 priests and lay persons and tossed them into a deep ditch. Only three priests lived to be rescued. Next, Cardinal Ruffo marched on Naples, which he hoped to capture through peaceful negotiations. After promising generous and merciful terms the French garrison surrendered in mid-June, 1799. British Admiral Horatio Nelson arrived to take command of all opposition forces and ridiculed Cardinal Ruffo for being so lenient toward the Naples garrison. Some Italians accused Nelson of coming to fix the barn door after the horses had already come home.

In all, the Congregation of the Holy Faith under Cardinal Ruffo had liberated the cities of Naples, Rome and Florence, destroying the revolutionary, republican and anti-clerical regimes established there. Their actions also proved that the revolution was not welcomed with open arms by the oppressed common masses. Here was an army of peasant farmers and untried civilians of every sort who, out of devotion to the Church, had risked their lives to drive out the liberal influence from Italy. They had hoped to come to the rescue of Pope Pius VI, but he died on August 22, 1799 before any arrangements could be made.
Posted by MadMonarchist at 12:25 AM