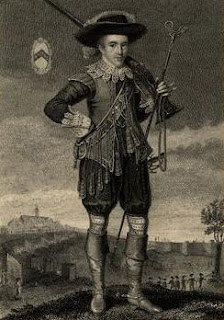 One of the more unsung royalists of the English flirtation with republicanism was Sir Nicholas Baronet Crisp. He was born around 1599 to Ellis Crisp, a wealthy merchant and sheriff of London. He first came to prominence for his business in the African trade and in 1632 was awarded a monopoly with five others of the trade on the Guinea coast. Elected to the Long Parliament he was expelled in 1641 for collecting duties on merchandise which he used as security to loan money to the cash-strapped King Charles I without the authorization of Parliament. The King called him, "my good, faithful farmer". Needless to say, when the English Civil War broke out he quickly took the side of his monarch and devoted all his energy and fortune to the royalist cause.

During the war he funded the raising of a regiment of foot and was shortly appointed colonel of a regiment of horse but his most valuable service was the outfitting of a fleet which carried supplies and maintained communications between the royalist forces and continental Europe. The Parliamentarians portrayed him as a pirate patron and painted him as the blackest of villains; which was quite a compliment considering the source. When the war ended in defeat for the King's forces Crisp was totally wiped out and what money he had not spent aiding the royalist cause was quickly taken by the Cromwellian dictatorship. He was forced to flee to France like many others but family connections allowed him to return but his politics had not changed in the least.

He was among those London Royalists who signed the declaration in support of General Monk to restore the Stuart monarchy. Later he was one of the commissioners sent from London to Breda to invite King Charles II back to his throne. Once the monarchy was restored his lot did not improve at once but within three years time he was paid back in part at least for all he had lost defending the Crown. The King also appointed him to a number of prominent offices to make up the defecit. In 1640 he was knighted and in 1665 was awarded a baronetcy. He spent the last years of his life at Hammersmith where he built a handsome mansion before his death in February of 1666 at the age of 67. In 1898 his body was moved to the Hammersmith church but his heart was removed and placed in a statue of his beloved sovereign King Charles I. For some time it was a tradition on the day of his death to remove the organ and refresh it with wine.
Posted by MadMonarchist at 12:58 AM