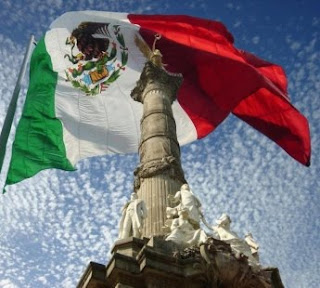 Last night at midnight President Felipe Calderon, reenacted the Grito de Dolores from the National Palace in Mexico City, ringing in September 16 in the fashion of Father Miguel Hidalgo the "Father of Independence" in 1810 when the long series of revolutions against Spain began. Watch the media and you will undoubtedly hear this referred to as Mexican Independence Day, but of course, that is a bit misleading considering that Padre Hidalgo uttered his cry in 1810 and Mexico did not become independent until more than ten years later in 1821 under the leadership of Don Agustin de Iturbide who became the first Emperor of Mexico. There is doubt as to whether or not Hidalgo even called for independence on September 16, 1810 though it is mostly agreed that he called for "death to the Spaniards".

Hidalgo, just to make the record clear, sparked a racial war when he called for the death of all people of European blood in Mexico. He was a Catholic priest who embraced the "Enlightenement" movement, denied the authority of the Pope, the virgin birth of Christ and clerical celibacy (he fathered 5 illegitimate children by two different women). When the bloodbath he unleashed provoked fear and retaliation on the part of Spain and the conservatives of Mexico he and his peasant army were defeated, Hidalgo was hauled before the inquisition, defrocked and he was executed by a Spanish firing squad. Contrast that with General Iturbide whose independence movement in 1820/21 was based on the three guarantees of "unity, independence and religion". Yet, as a monarchist, Emperor Iturbide has been considered politically incorrect throughout most of Mexican history and has been largely ignored by the general public while the more accepted radical Hidalgo is lionized and the date of his cry is the preeminent national holiday.

Most, however, have accepted this as one of the little quirks of Mexico and upon his arrival in Mexico even Emperor Maximilian reenacted the Grito de Dolores on September 16. Nonetheless, a few diehard monarchist conservatives in Mexico still let the day pass uncelebrated and wait until September 27 to have their own fiestas in recognition of the day that General Iturbide rode in triumph into Mexico City where he was hailed as Emperor.
Posted by MadMonarchist at 12:51 PM