Monarchists are Mad in Uganda 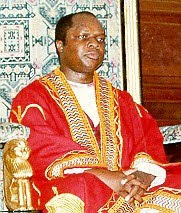 The musical monarchist over at Royal World blog reports a story from the BBC about royalist riots in the east African nation of Uganda. The riots started in reaction to government efforts to keep the King Muwenda Mutebi III of the Buganda (the largest Ugandan ethnic group) from visiting a troubled region near Kampala. Uganda is a republic but in recent years has allowed the restoration of the four major tribal monarchies as cultural figures only -without political power. However, the monarchs, like King Muwenda Mutebi III, have displayed the strength of the royal position even without political power as the monarchs have used the traditional support they have from the public to hold the government accountable in upholding the laws of the country. Needless to say this has annoyed the political big-shots on a number of occasions.
Posted by MadMonarchist at 1:39 PM