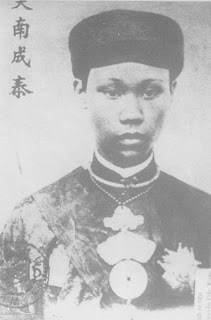 To some he is remembered as a great patriot, a poetic artist who tricked his enemies in an effort to pursue his own goals for the independence of his country. To others, he is a mad man, a Vietnamese Caligula more famous for the stories of his bizarre behavior than for anything else. He was born HIH Prince Buu Lan, son of the "3-day king" Nguyen Duc Duc. He did not immediately succeed his father but upon the death of Emperor Dong Khanh (whose own son was not allowed to immediately succeed him) in 1889 the young boy was plucked from poverty, taken to the "Great Within", scrubbed up, dressed in yellow dragon robes and enthroned as the Emperor of Vietnam with the reign name "Thanh Thai". Even at 10 he was observed to be very active and intelligent, curious and creative. However, in retrospect some judged that he had been flung from rags to riches and into a 'well stocked' harem too suddenly and early in life.

As he grew older the stories of his bizarre, perverse and at times cruel behavior behind the walls of the Forbidden City became legendary. Some maintain though that this was all an act, and point to his very well written poetry and political opinions as proof, that he was simply "playing the fool" to have greater freedom and divert attention. If so, he was an extremely gifted actor and the French were content to let him remain on the throne as a curiosity; a sort of tourist-attraction, while they ruled the country themselves. However, the reign of Emperor Thanh Thai was innovative in many ways. He was the first Vietnamese monarch to cut his hair short, drive a car and wear western clothes as well as the first to be extensively photographed. This did not endear him to the very traditional court but many people were impressed by his concern for them. He would slip out of the Great Within disguised as a common peasant to speak to his people and hear their complaints and concerns. 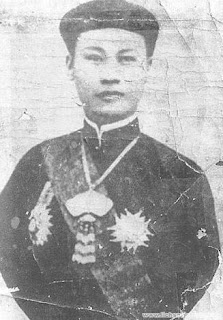 At one point the stories of eunuchs being beaten half to death, female servants found covered in bite marks or being forced to drink then flogged for drunkenness that the Imperial court had Thanh Thai sent away for a "vacation" by the French. They were not too concerned though, even when he paraded through the streets escorted by his personal army of women cavalry. It was only when it was discovered that he had been attempting to contact the royalist independence forces led by the exiled prince Cuong De that the French decided to depose him on the grounds of insanity. In 1907 he was reduced in rank to duke, exiled to Vung Tau island and replaced by his young son Emperor Duy Tan. However, he continued to cause controversy with his debts, odd behavior and caused considerable outrage at the outbreak of World War I when he discarded his French decorations and ostentatiously purchased only German made goods.

In 1916, when his son attempted to lead an uprising against the French, the opportunity was taken to be rid of them both. The throne went to Emperor Khai Dinh (now deemed good enough to succeed his father Dong Khanh) and Thanh Thai and Duy Tan were shipped off to La Reunion Island in the Indian Ocean. Thanh Thai still caused scandal, his own son calling on the French to intervene but to no avail. After the Vietnamese declaration of independence in 1945 he was allowed to return home but was mostly kept under house arrest on Vung Tau, though on one occasion he did meet his cousin, the reigning Emperor Bao Dai. He died on March 24, 1954 in Saigon and was buried in the tomb of his father in Hue. His record remains a mixed one. Most dismiss him as a lunatic, others however, maintain that the stories are overblown and that it was all a charade by a patriotic monarch who was trying to distract his captors to plan for the independence of his country.

Posted by MadMonarchist at 1:30 AM