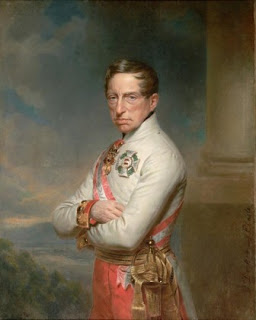 Archduke Charles, Duke of Teschen was the younger brother of Emperor Francis I of Austria and one of the primary antagonists of Napoleon Bonaparte. Although not quite as well known as Wellington or Bluecher, Archduke Charles was one of Napoleon's most capable adversaries. Although he suffered from epilepsy he showed great promise as a young officer while serving in Belgium. He gained fame as one of the greatest generals in Europe for his campaign in Germany in 1796 in which he defeated the French revolutionary armies of Jourdan and Moreau in turn. In 1799 he defeated Jourdan again in Germany, invaded Switzerland to defeat another French army and then succeeded in driving the French across the Rhine.
He refused the honors offered to him by the Austrian government and in 1806 was made commander-in-chief of the Imperial Austrian Army as he was the only figure to have defeated French Napoleonic forces which had seemed so unstoppable. However, he did meet his share of defeats when he went up against the French again, commanded by Napoleon, who had a much better army than in the past and who had him considerably outnumbered. Some criticized him as being overly cautious, too attached to defensive fighting and Clausewitz was dismissive of his attachment to the importance of strategic positions rather than the total destruction of an enemy force. Nonetheless, he was considered one of the preeminent soldiers of his time, possibly the greatest continental foe Napoleon had and later generations have judged his 1796 campaign in particular as practically flawless.
Archduke Charles retired from active duty in 1812 and in 1815 married Princess Henrietta of Nassau-Weilburg by whom he had five children, the oldest of whom went on to become Queen of the Two Sicilies. He died in Vienna in 1847 at the age of 75, one of the most admired and respected Austrian heroes of the Napoleonic Wars.
Posted by MadMonarchist at 5:06 PM