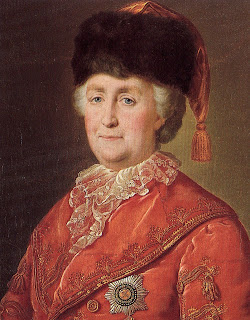 She was born Sophia Augusta Fredericka of Anhalt-Zerbst in Germany but is better known to the world as Catherine the Great, one of those liberal-minded yet still autocratic monarchs known to history as the “Enlightened Despots”. She is loved by some, loathed by others but impossible for any to ignore. She was liberal, tyrannical, reformist, repressive and many other contradictory things at the same time. Yet, from 1762 to 1796 she was ‘large and in charge’ of the Russian Empire. Few other monarchs left such a lasting impression, for good or ill, as Catherine the Great.

Born on May 2, 1729 she was married to the future Czar Peter III in 1745 However, a match made in heaven it definitely was not. In 1762, after only 6 months on the throne Catherine masterminded a coup that overthrew Czar Peter III who was later murdered though whether or not Catherine was involved has been long debated. She rewarded her supporters, instituted military and economic reforms and secularized the properties of the Russian Orthodox Church. She enacted reforms to improve public health and encouraged immigration to Russia. Catherine, although an absolutist, enacted new legislative reforms to strengthen this and the collection of deputies she gathered were praised by her admirer Voltaire though the serfs were given no representation. This, as well as her swift and brutal suppression of peasant uprisings led many to regard her liberalism as hypocritical while others still viewed her as an ‘Enlightened Despot’.

In foreign relations Catherine’s religious interference in Poland resulted in rebellion and this, in turn, led to a renewed war with the Ottoman Turks. In the end Russia was victorious and the national territory enlarged. She made new provinces answerable to her and charged the police with not only enforcing the law but public hygiene and morality as well. In her private life Catherine was scandalous and became notorious in her own time for her long succession of lovers whom she picked up and discarded regularly though was usually generous to them once their tour of duty was over. She continued her campaign of reform in the government, justice system and education. To further secure Russia against the Turkish threat she cultivated an alliance with her fellow “Enlightened Despot” the Holy Roman Emperor Joseph II.

When the American War for Independence broke out Catherine remained neutral and refused a request from King George III to provide 20,000 troops to serve in America. Her neutrality, especially in terms of the League of Armed Neutrality, was to the benefit of the American rebels but Catherine also said she would have killed herself rather than recognize US independence as George III eventually did and Russia did not establish relations with the USA until 1809. Another war with Turkey was long and costly even with Austrian assistance and another war with Sweden ended in stalemate. Catherine was too preoccupied with problems in Poland to participate in the first coalition against revolutionary France and her crushing of Poland eventually led to partition and the total loss of an independent Poland. She sent a military expedition against Persia and was finally organizing to aid in the war against France when she died in 1796, her final years marked by policies more reactionary than enlightened, so perhaps her hard experiences had taught her a thing or two. The throne then passed to her son who became Czar Paul I.

Posted by MadMonarchist at 12:49 AM