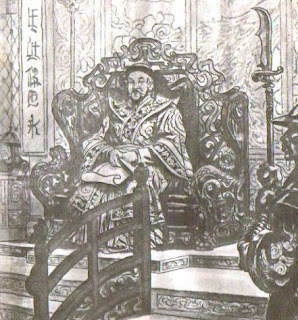 Although overshadowed by his famous grandfather Genghis Khan, Kublai Khan could probably be considered one of the great monarchs of world history. He came to power in 1260 upon the death of his older brother Mongke Khan as ruler of the vast Mongol empire. He is probably most famous for completing the conquest of China (making him the only foreigner to ever conquer all of China) and founding the Yuan dynasty which ruled Imperial China from 1271 to 1368. Although the realm under his actual control was 'limited' to roughly what is now China, Mongolia and southeast Siberia, as the Great Khan of the Mongols he was the titular but influential ruler of the largest land empire in history, covering one-fifth of the earth's surface. He learned the ropes of statesmanship as viceroy of northern China and through the influence of his wise and formidable mother adopted the policies there that he would later use to great success in the governing of his vast realm.

Kublai's mother was Sorghaghtani Beki, a Nestorian Christian, and it was she who ensured that he grew up to be religiously tolerant, learned in administration as well as military conquest and that he would work within the Chinese framework of government rather than trying to rule through occupation and plunder. Trade and agruculture would yield a better long-term economy than the traditional method of simple plundering. Kublai Khan emerged victorious from a small civil war for leadership and in a brilliant campaign completed the conquest of China and laid out the modern capital of Beijing. Kublai protected Confucian scholars and kept Confucianism as the ideal civic model as well as making use of Chinese talent. However, his was also a famously cosmopolitan empire and he employed many foreign experts and advisors. Christianity, Islam, Daoism and Buddhism were all fairly widespread and he entertained envoys from Venice, Flanders, France, Papal Rome and Persia. He improved communications and the agricultural infrastructure in China as well as extending the famously efficient Mongol postal system across the whole country.

Trade, traditionally a despised profession in China, became widespread and resulted in a new, prosperous middle class as well as greater ties with far flung countries. Tibetan Buddhism also experienced a period of growth through the influence of Kublai's favorite wife Chabi, who was herself quite an exceptional woman. Over time Kublai began to suffer the ill-effects of good living and became extremely overweight and suffered many health problems because of it. When Chabi and her son, Kublai's heir, died in 1285 the Khan fell into a dark mood that never left him. He lashed out in efforts to conquer Japan and Vietnam but these were defeated and his health and grown so bad that when he had to confront an uprising in Mongolia he could no longer walk (though the campaign was successful). He died in 1294 and was buried in an unmarked grave in Mongolia as was the custom.
Posted by MadMonarchist at 12:44 AM