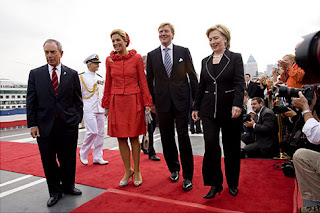 (left to right: Mayor of New York City Michael Bloomberg, HRH Princess Maxima, HRH Prince Willem-Alexander of Orange and U.S. Secretary of State Hillary Clinton)
The heir to the Dutch throne and his wife are visiting New York City, being shown the sites by Mayor Bloomberg and Hillary Clinton, to start a week-long commemoration of the arrival of the Dutch in New York (which they had named New Netherland) some 400 years ago. The Prince and Princess of Orange were greeted with a 21-gun salute and music by the US Marine Corps band as they addressed the crowd from the deck of the USS Intrepid. Alongside in the harbor were a number of watching ships including an exact replica of the famous Half Moon; the Dutch vessel that carried Henry Hudson to the New World those many centuries ago. The Prince of Orange spoke well of New York and Mayor Bloomberg and Hillary outlined the long shared history of the Netherlands and the United States, Bloomberg making mention of the Royal Netherlands forces fighting alongside the US military in Afghanistan today. 400 Years ago the Dutch established a colony in what is now New York, which they named New Netherland and held for a fair amount of time before being conquered by the English who renamed the area New York in honor of the First Lord of the Admiralty, who was then the Duke of York, who later went on to become King James II of Great Britain. You can read the details at the New York Daily News.
Posted by MadMonarchist at 3:43 PM