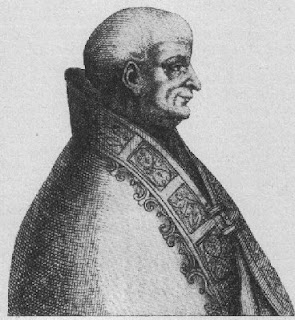 Pope Lucius II has the distinction of being the only pontiff to die from wounds received in battle and his reign is an example of what a perilous position the papacy was in during this period. He was born Gherardo Caccianemici and hailed from Bologna. After taking holy orders he became a canon in his native Bologna and was eventually elevated to the rank of Cardinal Priest of Santa Croce in Gerusalemme. Later he served as Church treasurer and Pope Honorius II appointed him papal legate to King Lothar III of Germany, a post he also held under Pope Innocent II before becoming his chancellor and librarian. It was he who urged Lothar to mount two expeditions into Italy to defend Innocent II from the antipope Anacletus II. With such a record of service he easily made the list of the papabile. On March 12, 1144 he was elected to the See of Peter as Pope Lucius II. He succeeded Pope Celestine II who had clashed with the Norman King Roger of Sicily.

Lucius II also faced immediate troubles with Roger II of Sicily. He met the Norman king at Ceprano to try to impress upon Roger the importance of his duties to the Church, but the powerful king would have none of it and responded with demands of his own on the Pope. Lucius II, together with the other bishops, found these demands unacceptable and eventually Roger sent an army under General Robert of Selby to invade the Papal States and force the Pope's hand. Lucius II, however, was faced with bigger problems closer to home than the south of Italy and he worried that he might need Norman support in dealing with this new threat, a threat which rose up specifically at this time of danger for the independence of the Holy See.

That threat was a secularist republican movement which had arisen in Rome and came to power under Innocent II. When Lucius dissolved the Senate the republican leaders formed a Commune under the control of Giordano Pierleoni who was the brother of the antipope Anacletus II. The same year that Lucius II was consecrated the Commune had adopted a new constitution and had begun discussing the complete removal of the Pope as sovereign of the city of Rome, in effect deposing him from his temporal power as local monarch. Obviously, this commanded the Pope's attention and he called for help from both Roger II of Sicily and the Roman nobility which had been displaced by the Commune. Roger sent no help but did at least refrain from attacking the Pope while he dealt with the Commune. During this time Portugal also submitted to the Holy See but was of little practical help in the present crisis.

With no help coming from the Normans, Lucius turned to Germany and Kaiser Konrad III who had brought the Hohenstaufen dynasty to the imperial throne. He had also been excommunicated by Pope Honorius II who had supported Lothar III for emperor. The Kaiser was cordial to Lucius' delegation but was also just as cordial to the republican delegation which came to ask him to kindly stay out of Roman affairs. Despite the obligations of his position as Holy Roman Emperor Konrad would give no help to the Pope and was content to see how things played out before deciding where the most benefit for himself could be found.

This left Lucius II with no other option but to deal with the problem himself; and that he did. With only a relative handful of his loyal Roman militia, Pope Lucius strapped on his armor, took up his sword and personally led an attack on the republican position on the Capitol. The Communards put up stiff resistance and pelted the papal troops with stones from their positions. During this deadly onslaught, Lucius II was struck in the head and severely injured. His wounds were so serious that an election for his successor was convened the same day as the disasterous attack, so he obviously was not expected to survive. The Frangipani took him to the monastery of St George where died from his wounds on February 15, 1145. He was buried in the Lateran, the only pope in history to die from wounds sustained in battle.
Posted by MadMonarchist at 4:55 PM