Wedding of a French Pretender 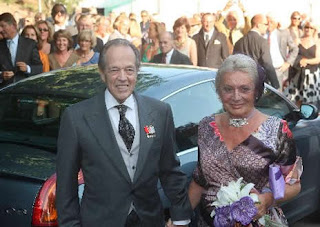 Henri, Comte de Paris, Orleanist pretender to the French throne had his religious wedding on the 26th to Princess Micaela d'Orleans whom he had married in a civil ceremony in 1984 following his divorce from Maria Teresa of Wurttemberg, Duchess of Montpensier. The religious wedding had to wait until now as it was only last year that the Catholic Church had ruled that his previous marriage had been invalid. The ceremony was held at Arcangues, France and was a very small affair with none of the Prince's children attending. Members of the French and European aristocracy were on hand including, among others, Prince Alexander and Princess Lea of Belgium, Princess Nesrine Tousson, the Duke and the Duchess d’Uzes, the Duchess of Segorbe, the Dowager Duchess of Magenta, the Marquis and the Marchioness of Arcangues, Countess Ariane de Bourbon-Busset and Count Paul de la Panouse. The Count of Paris is head of the Orleans branch of the French Royal Family, that line which tried to come to an understanding with the forces of the Revolution. His claim to the throne is contested by the legitimist branch headed by Prince Luis Alfonso, Duc d'Anjou as well as, for some, the House of Bonaparte though the leaders of this family have openly embraced the republic.
Posted by MadMonarchist at 3:03 PM