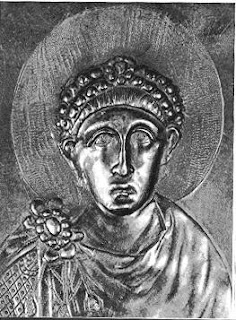 Emperor Theodosius I, a native of Spain, was a great statesman and a devout Christian. His father was executed for treason in 375 but Theodosius' talent ensured that he was recalled after the unprecedented Roman defeat by the Visigoths at Adrianople, where Emperor Valens was killed on the field of battle. Theodosius was made a general and sent to defend the border by Emperor Gratian, the Roman Emperor who officially dropped the title "Pontifex Maximus" from the imperial list, surrendering it to the Pope. Theodosius proved himself to be a bold and brilliant commander, firmly defeating the Goths and reestablishing Roman control over the region. Because of his success, Gratian named Theodosius Emperor of the East on January 19, 379. Theodosius finished up the Goths, concluded peace with them and brought greater unity to Eastern Rome by defeating and executing the traitor Magnus Maximus who had usurped the throne of Emperor Gratian.
With this, Theodosius became the sole Emperor of Rome; it would be the last time in history that one man who rule over both the east and the west. He then began a long association with the great Bishop Ambrose of Milan and mutual respect soon grew between them. Their relationship would be the foundation of the Church and State ideal for Christendom. Coming from the east, where the Church tended to be slightly more subservient, and being a Roman Emperor after all, Theodosius and Ambrose soon came into a slight conflict. Once, while at mass, St Ambrose sent a deacon to request that Theodosius stop sitting among the clergy and move in with the congregation saying, in a very brilliant remark, "The Emperor is in the Church, not over it". When the bishop opposed a policy, the Emperor was insulted and for a time refused to deal with St Ambrose at all.
However, Emperor Theodosius was nothing if not a zealous son of the Church, in fact it was his methods rather than his principles which most often brought him into controversy with the Bishop of Milan. He was a Roman Emperor, lifted from the field of battle to assume the purple, and he knew one way of dealing with enemies: harsh severity. In 390 the action occured which caused the event for which Emperor Theodosius is most famous. The capital city of Macedonia, Thessalonica, one of the greatest cities in the Roman world, rose up in rebellion against the Emperor. Their was a riot, mobs stormed government buildings and the Roman commandant was stoned to death. The Emperor was enraged, St Ambrose tried to calm him and advise forgiveness, but this was not the way Roman soldiers were used to acting. Traitors had to be made example of. Emperor Theodosius issued his order for a reprisal, but after wrestling with his conscience, recalled the command. Alas, it was too late, and the order was carried out. All of the people of Thessalonica were invited to the stadium for games, a sign of reconciliation perhaps. Once inside however, the exits were sealed and imperial troops stormed in and for the next three hours massacred 7,000 Thessalonians, men, women and children. 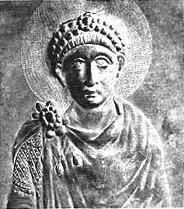 In an act many modern bishops could learn from, St Ambrose sent Theodosius a confidential letter informing him that this act of cruelty had caused him to be excommunicated and that he should not present himself for communion. He reminded the emperor about the holy King David, who had also sinned but repented and was restored to God's favor. Until Theodosius did the same, he was cut off from the Most Blessed Sacrament. St Ambrose wrote to him, "I dare not offer the sacrifice, if you determine to attend. For can it possibly be right, after the slaughter of so many, to do what may not be done after the blood of only one innocent person has been shed?" The Emperor was torn by this; he felt great saddness and remorse, yet it went against centuries of Roman tradition for the Emperor to lower himself before any man or confess to an error of any kind. He passed a new law that punishment must wait 30 days after one is condemned, but still the bishop insisted that the Emperor do public penance before being reconciled fully with the Church. Finally, in an unprecedented and truly historical event, Theodosius, the exalted Caesar, Emperor of Rome, came to the basilica, solemnly removed all of his imperial regalia and symbols of rank, knelt before the simple bishop and confessed his sin before all present. He did penance from October until December showing full humility and repentance before he was totally reconciled with the Church and allowed to recieve Holy Communion. It was an important act that set the precedent for the final superiority of the Church in spiritual matters, even outranking the Emperor himself.
The event seems to have quite an impact on Theodosius. He said later that, "I know of no except Ambrose who deserves the name of bishop". In 391 Emperor Theodosius officially made Rome a Christian Empire, closing down all of the remaining pagan temples, outlawing pagan worship and making Catholicism the official state church. His official declaration stated that the religion of Rome would be that, "which Holy Peter delivered to the Romans...and as the Pontiff Damasus manifestly observes it." The following year there was another rebellion, this one backed by the promise of a pagan emperor, which Theodosius was able to put down. He also insisted on Catholic orthodoxy, being a strong opponant of the spread of Arianism. He passed laws against heresy and saught with all of his power to make Rome a strictly orthdox, Catholic state, united by one Church and one Emperor. However, he was never again harsh with his enemies. According to the historian Sozomen, "He did not desire to punish, but only to frighten his people, that they might ponder, as he did, Divine matters". As part of his effort to ensure true religious teaching throughout the empire, earlier in 381 he had called the Council of Constantinople, the fisrt since Constantine's Council of Nicaea. It's main purpose was to show the error of the Arian heresy.
Emperor Theodosius the Great died in 395. He left a legacy matched by few others in Roman history. The Empire had been reunited, internal subversion suppressed, external enemies repelled, paganism abolished, and religious unity through the Catholic Church. Rome was united, strong and religiously sound. At his funeral, St Ambrose delivered the oration, a brilliant tribute to a great Christian Emperor called "De obitu Theodosii".
Posted by MadMonarchist at 12:32 AM