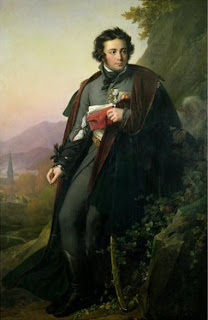 Charles Merchior-Arthus Bonchamps was born on May 10, 1760 in Anjou at the Chateau of the Crucifix. Once grown, Bonchamps journeyed to India in the regiment of Bailli de Suffren. He first saw battle fighting with the French forces in the American War for Independence and was promoted to captain in the grenadiers after his return. A staunch royalist, he resigned his position and retired when he did not like the direction the country seemed to be taking. After having been retired for some time before the revolution broke out, Bonchamps feared for his King and country and so requested to be reinstated. He was in the area when the Paris mob stormed the Tuilieres and helped to hide other notable royalists like La Rochejaquelein and Charles d'Autichamp from the revolutionaries.
In September he returned to Anjou and was denounced by the Jacobins. He was forced to stand trial at the tribunal at Maine-et-Loire but was acquited. The following year, in March of 1793, a group of peasants who were rising against the republicans requested that Bonchamps come and serve as their leader. He gladly accepted and joined the counter-revolutionary forces. Due to his courage and intellect, Bonchamps quickly began to assert himself as a great tactician in the Catholic & Royal Army. The people of the Vendee chose him as their leader and he was able to secure a great deal of supplies and weapons that would be essential for the counterrevolution.
Bonchamps was a hero in many battles and led his troops to many great victories. He participated in the capture of Bressuire, Thouars and Fontenay-le-Comte where he was wounded but managed to recover. However, the struggle was coming apart due to a lack of a unified command and at the cause seemed to lack direction. Many of the soldiers would often leave after a victorious battle to look after their families and farms. Disaster came on October 17, 1793 at the battle of Cholet. The heroes of the Vendee were defeated and Bonchamps was mortally wounded.
He was taken away and lingered for another day. His loyal soldiers wanted to kill the 5,000 republican prisoners they had taken whom they blamed for the death of their champion but Bonchamps refused to allow such a thing and pardoned them. There, on his death bed, Bonchamps stated that he was glad to have served his God, his King and his Country. The death of Bonchamps has been called the greatest victory for the republican forces. Bonchamps was arguably the best tactical leader in the Vendeean army and defeating him gave the blue army a huge morale boost. Bonchamps was and is a hero for the forces of the Christian monarchy, and was even admired by many of the revolutionaries. His success and natural class made him admired by both friends and enemies alike.
Posted by MadMonarchist at 12:44 AM