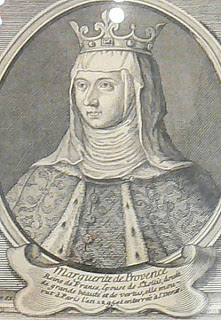 The Queen of France and consort to the great King St Louis IX, Margaret of Provence was born in 1221 the daughter of the Count of Provence Raymond Berenger IV. On May 27, 1234 she married King Louis IX at Sens and was crowned Queen of France the following day. She was a famous beauty with dark hair and dark eyes and there are numerous stories about her little acts of kindness toward her devoutly religious husband. The marriage had been arranged by the Queen Mother Blanche of Castile to cement the support of the Count of Provence in the seemingly endless war with England. However, she was none too fond of Queen Margaret and treated her rather harshly, over time fearing her ambition and seeming fondness of the English. The attitude of St Louis toward his wife is more controversial. Some sources say he distrusted his wife and treated her coldly while other sources state that the couple truly loved each other. The truth seems to be that the King did love and trust his wife but his humble, pious character was somewhat at odds with the more forceful Queen Margaret.

Queen Margaret was a strong right arm to St Louis and his closest advisor. She was also certainly not a timid woman and accompanied the King on his crusade, displaying particular heroism at Damietta where she gave birth to Prince Jean Tristan. She became the only woman to lead a crusade when her husband was captured and it was Queen Margaret who oversaw the negotiations for his release.

In France Queen Margaret raised more than a few eyebrows because of her opposition to her brother-in-law Charles of Anjou who had married her sister Beatrice and her admiration for King Henry III of England who was married to her sister Eleanor. In 1263 she had Prince Philip, heir to the French throne, take an oath that even after acceding to the throne he would continue to obey his mother until he was 30 years old. St Louis saw this as overreaching and yet binding as oath was something sacred. To get out of it he had to petition Pope Urban IV to release his son from his promise. Queen Margaret stayed in France when St Louis left on his second crusade where he died.

After that time Queen Margaret returned to Provence, keeping in touch with her beloved sister Eleanor. She tried to maintain her rule of Provence county in preference to Charles of Anjou. When the clouds of war gathered she called upon her son, her nephew King Edward II of England and Rudolf von Hapsburg the King of Germany for assistance. She maintained her claim to Provence until after the death of Charles in 1285 when Philip the Bold persuaded her to accept an income from Anjou in place of her rights over Provence. Four and a half years after the death of her sister Queen Eleanor, Queen Margaret followed her in 1295 at the age of 74.
Posted by MadMonarchist at 1:22 AM