Chipping Away at the Great in Britain 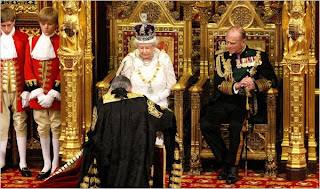 I am a little surprised that this story (which has been out for a while) has not attracted more attention from the Angloblogosphere. I would not have known about it were it not for the report from the American Monarchist. The story covers the announcement from the palace that those who are given an audience with the Queen are no longer required to bow their head and walk out of the royal presence backwards. I realize this is not a *huge* issue and yet I still see it as a further chipping away of respect for the Crown and thus yet another attack on the "Great" in Great Britain. I will admit, I am a bit obsessive on this issue. I love seeing officials in Thailand crawl on their hands & knees before the throne, I winced when reading of when the last Emperor of Vietnam abolished kowtowing in the 30's and I tend to look at the era of when visitors kissed the Pope's foot as 'the good ol'days'. All of these things are to foster respect for the monarchy, not simply the monarch him(her)self; it is what they represent. It never fails to infuriate me whenever anyone still complains about the (now non-mandatory) outward signs of respect given to someone like Queen Elizabeth II. For crying out loud, it has basically been reduced to a nod of the head from men and a half stumble for women! It's not as though anyone is being forced to get down on both knees and touch their forehead to the floor. This is also further proof that the revolutionary, leftist elements want nothing more than to rest power from royal hands. That is paramount but as trends like this show the ultimate goal is to take away the respect and reverence given to the Crown and finally to take away the Crown itself.
Posted by MadMonarchist at 9:02 PM