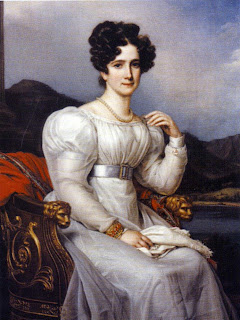 Born in Karlsruhe in 1781, Frederica of Baden was the daughter of Karl Ludwig of Baden and sister to the Czarina Elizabeth, consort of Czar Alexander I of Russia. In 1797, in Stockholm, she married King Gustav IV Adolf of Sweden because of her family ties to the Russian court and because of her beauty. The reign of Gustav IV Adolf brought about a return to autocracy and a new attitude for Sweden in terms of foreign relations including a new, friendlier, relationship with Denmark. Queen Frederica was treated well by her mother-in-law, Sophia Magdalena of Denmark, who wanted her to have a better experience at the Swedish court than she had. Many in Sweden saw her as prudish and unfriendly. She viewed the court as excessively immoral and wondered whether she was the only woman there who was not having a number of affairs. The King was extremely taken with her, perhaps more so than she would have liked, and she complained of being -shall we say- "overworked" by her husband.

Nonetheless, the King took care to maintain her innocence and after producing an heir in 1799 she was formally crowned Queen of Sweden the following year. Her marriage further improved after a tour of Finland and a visit to her sister in Russia and visits back to her homeland of Baden were always enjoyable. Gustav IV Adolf took a very dim view of the changes in revolutionary France and of their rising champion Napoleon Bonaparte. However, Queen Frederica was influenced by her sister Czarina Elizabeth to try to convince her husband to make peace with France. The King saw this as tantamount to pushing for friendship with Napoleon and he rejected it absoutely as well as resenting the efforts of his wife to influence policy.

The King was soon drawn into a disastrous war with France and later with Russia when the Russians tried to force him into the continental system, which resulted in the loss of Finland. The British arrived to assist but the King could not abide the British commander and sent them packing. Soon after, in 1809, a coup overthrew the King and Queen Frederica was sent with the children to house arrest in Haga. Everyone was impressed by the calm dignity with which Queen Frederica endured her misfortunes. Queen Hedwig, consort of the new monarch King Carl XIII, befriended Frederica and even offered to help ensure the succession of her son Prince Gustav of Vasa. However, Queen Frederica refused to participate in putting her son on a throne that rightly belonged to her husband and instead offered to give up the rights of her son in return for being reunited with her husband.

When a group of Swedish military officers approached her with a similar offer, to put her son on the throne with Queen Frederica as regent, she again refused. She said it was her duty to share the misfortunes of her husband and as long as he remained in exile so would she. The family was reunited and sent into exile in Baden where their marriage, for all intents and purposes ended. She refused to have marital relations with her husband because she did not want to give birth in exile. She also desired a more regal lifestyle than Gustav IV who would have been just as happy living a simple family life. In 1812 the couple was formally divorced but Frederica continued to secretly support her husband financially. She remained interested in Sweden while spurning all proposals of foreign intervention on her behalf and finally died of heart disease in 1826.
Posted by MadMonarchist at 1:09 AM