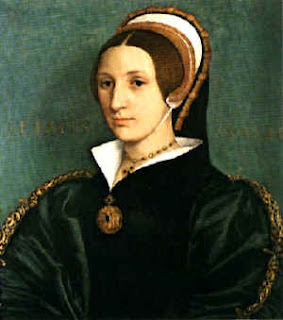 In any review of the six wives of King Henry VIII, most attention seems to always focus on his early wives, especially the first two; the pious and loyal Queen Catherine of Aragon and her successor the ambitious and flirtatious Ann Boleyn. Much less attention is given to the later wives, some of whom historians actually know rather little about at the end of the day. One such wife was Queen Kathryn Howard, whom King Henry VIII called, "A rose without a thorn". Possibly nothing other than the loss of Queen Jane Seymour caused Henry VIII so much grief as Kathryn Howard. Since relatively few concrete facts are known about her and her marriage to King Henry, there has been throughout history conflicting views about what kind of woman she was. We are not even sure of the portraits of her are accurate. Some have regarded her as a selfish, wicked temptress while others assert that she was a victim of court intrigue, a lustful and jealous king and a family conspiracy; she was not perfect, but probably undeserving of her ultimate fate.

The image I have of Kathryn Howard is the popular cheerleader from high school, nice enough to everyone but not the best at thinking things through. From very early on she was very attractive and she knew it. Men were drawn to her like moths to a flame and she does not seem to have been the best at fighting temptation. However, most of what we "know" about her rather colorful life before her marriage is based mostly on rumor and accusations from enemies at court. Nonetheless, pure as the driven snow she most likely was not. It was the ambitions of her family that secured her a place at court and later aimed her at Henry VIII. After the disaster that was his marriage to Anne of Cleves, Henry VIII was quick to propose to the beautiful, young Kathryn. In July of 1540 Henry had his marriage to Anne annulled and on July 28 he married Kathryn Howard, though some believed that the 50-year-old, overweight monarch was unable to consummate the union.

Henry VIII was happy though. As far as he knew, Kathryn was perfect; a gorgeous young virgin who loved him in spite of his age and appearance. Kathryn was likely not so enthralled with married life. However, Henry continued to spoil Kathryn with the most extravagant gifts of luxuries of every kind. Queen Kathryn seemed the only good thing in the life of Henry, but the young girl was in an elaborately gilded cage. She wanted to socialize and dance but Henry was unable to at his age and so would often simply watch at parties while his teenage bride danced with the other strapping young men at court. For a young girl unaccustomed to denying herself anything, temptation was everywhere. The royal couple had scarcely anything in common and as much as Henry was infatuated with his bride in the full bloom of feminine teenage youth and beauty, she was disgusted by the sight of her aging, sickly and obese husband. In modern terms Kathryn was the prom Queen and Henry was the former captain of the football team who had become a cranky old man with a beer belly.

It is then not beyond comprehension that Queen Kathryn soon became infatuated with the handsome, young Thomas Culpeper. This was a particularly dangerous relationship as Culpeper was probably the one courtier closest to the King and the one he trusted the most. Henry VIII saw in the strapping young man everything that he used to be. Surrounding himself with younger men and having married his ideal "trophy wife" Henry VIII seemed every bit like a man going through a postponed midlife crisis. Now there was to be an illicit romance between the courtier he trusted most and the wife he believed to be as chaste and loyal as she was beautiful, the "rose without a thorn". Henry VIII was about to learn that even the loveliest roses have thorns, and sometimes the biggest ones.

Queen Kathryn, however, was nothing like her ambitious cousin Ann Boleyn. She had not actively sought out attention from the King, nor had she been his mistress or aspired to become his wife. Instead, she was plucked from her fun-loving life at court and thrust into a marriage with a man who spoiled her with every luxury imaginable, but for whom she never had any real feelings and to whom she was not the least bit attracted to or satisfied with. In quick order rumors of an affair between Queen Kathryn and Thomas Culpeper were hip deep. Not much is definitively known of their relationship. Like much of Queen Kathryn and her past and character most of the information that exists comes from rumors, second hand accounts and oftentimes from the accusations of people at court who were the enemies of her family and thus stood to gain considerably by ruining the reputation of Queen Kathryn.

Most have assumed that the two had a full blown affair, but there is actually no concrete evidence that their relationship ever became sexual though that is what is most often reported. Unfortunately, Kathryn was unaware or unbothered by the fact that the Queen is a public figure, and particularly in the Tudor court, it was impossible to keep a secret and soon more and more people were whispering about her and Culpeper. Kathryn was also naive and did herself no favors in the people she surrounded herself with such as past flames like Henry Mannox and Francis Dereham. As her enemies at court spread scandalous rumors, especially the Seymour clan, they hoped to regain the position they had enjoyed under Queen Jane. Yet, they had failed to take into account exactly how much the King had idolized Kathryn as the perfect woman, and the extent to which he allowed her to provide him with reassurance in his own mind that despite his age, appearance and temperament that he still "had it".

When the first reports of these rumors were put to the King he refused to believe them. However, as more stories were collected, doubt crept into the King's mind. With his fury slowly growing, Henry had Queen Kathryn placed under what amounted to house arrest with Lady Rochford to wait on her and interrogations began. Yet, even if the Queen had actually had an affair with Dereham before her marriage to the King, that was a sin but not a crime. Kathryn was threatened with the possibility of divorce and banishment until she finally admitted that she did have an inappropriate relationship before her marriage, though it had not progressed entirely to fornication.

It seemed as though the young Queen might weather the storm, but then someone came forward with a love letter from Kathryn to Thomas Culpeper. King Henry VIII blew into a rage perhaps even more pained than that which had cost Ann Boleyn her head. Not only had his perfect, ideal wife lost her virtue before marrying him, but now there was at least some evidence that she had committed adultery with his favorite courtier. Whether she actually had or not cannot be said with certainty, but for someone in her position, with her enemies and with the King believing it, evidence didn't really matter. Her fate was sealed. On December 8, 1541 Thomas Culpeper and Francis Dereham were executed at Tyburn for high treason. They were hung, stretched, disemboweled, quartered and beheaded.

A month earlier Henry VIII went to Parliament and presented the idea that it was treason, not just for the wife of the King to commit adultery as was already the law, but also for any woman who was not a virgin to marry the King. With the Parliament thus prepared, in January of 1542 Parliament considered the charges against Kathryn Howard. She was moved to the Tower of London on February 10, 1542 and two days later the bill of attainder Henry had proposed was passed. Kathryn was judged guilty of high treason and sentenced to death by beheading. The sentence was to be carried out the following day on February 13, 1542.

For someone who had not shown a considerable amount of thought in her actions, Kathryn Howard was surprisingly dignified in the matter of her death. The night before her execution she had the block brought to her room and repeatedly rehearsed how she would position herself on it so the execution would go as smoothly as possible. On the morning of her death she was calm and composed. In her final statement she asked that her family not be punished because of her own sins and asked the public to pray for the mercy of God on her soul. She lowered her neck across the block and the executioner took off her head with a single blow. Following the execution Kathryn was buried close to her cousin Ann Boleyn.

Whether she actually betrayed the King as horribly as is often believed we cannot say, but Henry VIII was no innocent victim himself, even if all of the lurid rumors were true. He had forced himself on a young girl who he should have known was totally unsuitable and could never have been what he wanted her to be. Locked in an arranged marriage with a man she did not love, surrounded by temptation as well as enemies who would stop at nothing to ruin her reputation and see her downfall, Kathryn Howard was effectively in a no-win situation from the first day Henry saw her.
Posted by MadMonarchist at 12:19 AM