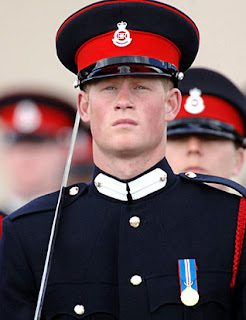 HRH Prince Henry of Wales celebrates his 25th birthday today. He has had a bit of a controversial reputation over the years but his late mother warned us from day one that the "spare" was the wild one of the pair. I also give Prince Harry alot of credit for his military service. While politicians cast votes sending the sons and daughters of others off to war Prince Harry was one of those who went, put his backside in the line of fire and roughed it with everyone else while most of the offspring of the elites would have none of it. Say what you will about him the Prince has served in the hardest occupation in the world with no special treatment because his grandmother happens to be the Queen. The Mad Monarchist joins all the loyalists of Britain and the Commonwealth in wishing Prince Harry a happy birthday.
Posted by MadMonarchist at 3:00 AM