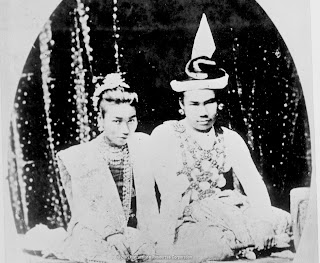 One of the countries overlooked in both its rich royal history and its suffering in recent times is the former Kingdom of Burma. I would encourage anyone to take a better look at the country, it is breathtaking. The myriad temples, the monuments and royal palaces are positively stunning. Prior to colonial rule the last King of Burma was Thibaw Min. He was born on January 1, 1859 to the famous King Mindon Min in the royal palace of Mandalay, a place which still holds the royal heritage of Burma and is considered the cultural heart of the country. His family was the Konbaung dynasty, creators of what is often known as the “Third Burmese Empire”.

A quiet and scholarly young man, Thibaw studied in a Buddhist monastery as was the custom in Burma. He would not have thought of becoming king were it not for the schemes of Hsin Hpyu Ma Shin, Queen of the Middle Palace. She had no sons but Thibaw was the sweetheart of her daughter (his half-sister) and when King Mindon died she proclaimed that he had agreed with her to make Thibaw his successor. So, at the age of 20 on October 1, 1878 Thibaw Min was crowned King of Burma or, as was his official title, “The Royal Thibaw, Golden-footed Lord of the white Elephant, Master of a Thousand Golden Umbrellas, Owner of the Royal Peacocks, Lord of the Sea and of the World, Whose face is like the Sun”. Once he was on the throne Queen Hsin Hpyu Ma Shin had all other potential rivals killed. This, like it or not, was almost standard practice for Burma.

Thibaw was a mild-mannered, laid back sort of fellow and easily manipulated by the ambitious forces around him. He married two of his half-sisters and the younger, Supayalat, became Queen of the Southern Palace (chief queen). While she, her mother, and their supportive ministers consolidated their power the colonial powers of France and Britain moved closer and closer to Burma, drawn by the tales of riches and farmers having to clear out piles of rubies while planting their fields. Because of the chaos there was no one left to meet the crisis when the British began their final drive for annexation from India in 1885. They paraded an imposter before them claiming he was an exiled prince who would give them a better life if they submitted to British rule. King Thibaw wanted no more war, indeed he never wanted to be ruler at all and preferred to spend his time chanting Buddhist prayers and studying scriptures. He offered no resistance.
When 11,000 troops occupied what was left of the Kingdom of Burma Thibaw was deposed by the British and exiled to India with Queen Supayalat (who was very pregnant at the time), their two baby daughters and the Queen’s sister Supayalay. Thibaw Min died in exile in India on December 19, 1916. Supayalat returned to Burma in 1919 and wore white for the rest of her life (the color of mourning in the Far East) as a symbol, she said, of her regret and repentance. She died in 1925.
Posted by MadMonarchist at 1:02 AM