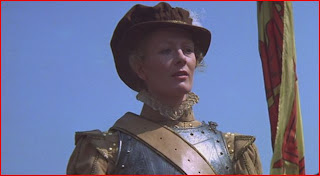 Vanessa Redgrave as Mary Queen of Scots in the 1971 film Mary Queen of Scots. Vanessa Redgrave certainly has illustrious Tudor film credentials. Aside from Queen Mary she appeared as Anne Boleyn in the 1966 film A Man for All Seasons (which she did voluntarily without salary) and she was Alice More in the made for TV version of the same film alongside Charleton Heston. This film version of the story of the last Catholic Queen of Scots is not the most sympathetic and it forced her to share screen time and story importance with Queen Elizabeth I of England. However, Vanessa Redgrave gives an excellent performance of the Scottish queen as a well meaning woman, a woman of strength and one plagued by misfortune. It is the emphasis of the film though that Mary was more woman than Queen, however, she convincingly portrays Mary as a woman not naive in politics, though certainly so in romance at least concerns Lord Henry Darnley. My favorite scene by far is her triumphal ride into recently conquered Dunbar, riding side saddle, breastplate fastened on, royal banner and crosses of St Andrew fluttering around her and bagpipes skirling. She enjoyed few such happy occasions in her life or in this film.
Posted by MadMonarchist at 12:26 AM