Worries for the Thai King 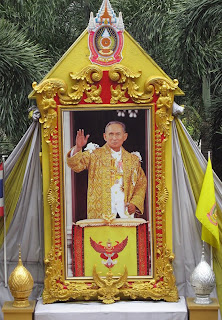 After being hospitalized for more than two weeks there are growing fears in Thailand that the aged and frail "Lord of Life" may be nearing the end of his own. The palace has been trying to play down the seriousness of the beloved monarch's condition but as time passes more people are starting to worry. King Bhumibol Adulyadej the Great was hospitalized for fever and lung inflamation and it now seems that he must have suffered a stroke. Thais have been gathering outside the hospital clasping portraits of the King, chanting Buddhist prayers and wearing pink which, during an earlier illness, a royal astrologer said was a color beneficial to the King's health. In the south of the country the Muslim minority has directed prayers for the King's recovery. As the longest reigning head of state in the world most Thais cannot remember a time when Rama IX was not on the throne and his intervention in times of political crisis as well as his tireless efforts to improve the lot of his people has made him one of the most beloved and revered monarchs in the world; even by the standards of a country whose monarchs have traditionally been considered semi-divine to begin with. The Mad Monarchist joins all Thais and admirers around the world in wishing a swift and full recovery to the "Great King of Siam".