General Order No. 15: A Past Monarchist Manifesto 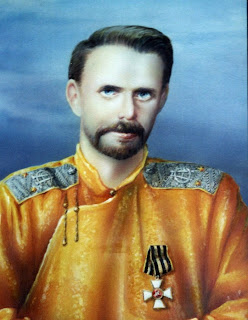 ORDER
To Russian detachments in the territory of Soviet Siberia
No 15 given at Urga, May 21st, 1921
I, Lieutenant General Baron von Ungern-Sternberg, commanding the Asiatic Cavalry Division, bring the following to the notice of all Russian units ready to fight the Reds in Russia.
Russia was formed gradually out of various elements, few in number, which were welded together by unity in faith, by racial relationship, and, later, by similarity in government. So long as she was untouched by the principles of revolutionary thought, which are inapplicable to her owing to her composition and her character, Russia remained a powerful, indissoluble empire.
The revolutionary storm in the West profoundly undermined the mechanism of the State by detaching the intellectuals from the mainstream of national ideas and aspirations. Led by the intelligentsia, both political-social and liberal-bureaucratic, the people -though in the depths of their hearts they remained loyal to Tsar, Faith and Fatherland- started straying from the narrow path laid down by the whole development of national thought and life…revolutionary thought flattered the vanity of the mob, but it did not teach the people the first principles of freedom or construction…the crowd is a barbarian, and acts as such on every occasion. As soon as the mob has secured freedom it speedily turns into anarchy, in itself the height of barbarism…
First the year of 1905, and afterwards 1916-1917, witnessed the criminal, horrible harvest of the seed sown by the revolutionaries…Three months of revolutionary license sufficed to destroy what many centuries had achieved…The people feel the need of a man whose name is familiar to them, whom they can love and respect. Only one such man exists; the man who is by right lord of the Russian earth, THE EMPEROR OF ALL THE RUSSIAS, MICHAEL ALEXANDEROVICH…In the course of the struggle against the criminals who have destroyed and profaned Russia, it must be remembered that, on account of the complete depravation of morals and the absolute licentiousness, intellectual and physical, which now prevail in Russia, it is no longer possible to retain our old standard of values. ‘Truth and mercy’ are no longer admissible. Henceforth there can only be ‘truth and merciless hardness’. The evil which has fallen upon the land, with the object of destroying the divine principle in the human soul, must be extirpated root and branch. Fury against the heads of the revolution, its devoted followers, must know no boundaries.
The Holy Prophet Daniel foretold of the cruel time when the corrupt and the unclean would be defeated and the days of peace would come: ‘And at that time shall Michael stand up, the great prince which standeth for the children of thy people: and there shall be a time of trouble, such as never was since there was a nation even to that same time: and at that time thy people shall be delivered, every one that shall be found written in the book. Many shall be purified, and made white, and tried; but the wicked shall do wickedly: and none of the wicked shall understand; but the wise shall understand. And from that time the daily sacrifice shall be taken away, and the abomination that maketh desolate set up, there shall be a thousand two hundred and ninety days. Blessed is he that waited, and cometh to the thousand three hundred and five and thirty days’.
Posted by MadMonarchist at 11:30 AM

Email ThisBlogThis!Share to TwitterShare to FacebookShare to Pinterest
Labels: Baron, Order No 15, Ungern-Sternberg