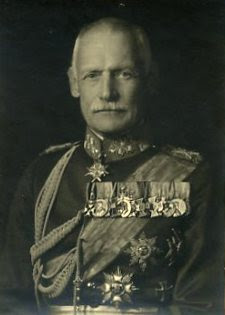 The story of Crown Prince Rupprecht of Bavaria is one of those which could easily have been simply that of a great tragedy, of noble but ultimately lost causes. Yet, Crown Prince Rupprecht is unique in that his life was on the whole an extremely successful one, despite the fact that he suffered the loss of his future kingdom. Even while Germany fell into defeat, anarchy and ruin Rupprecht himself was victorious in every task he set himself to and remained an extremely popular and beloved figure throughout his life. Indeed, his great talent and the fact that he was held in such deep admiration by so many people only adds to the many possibilities whispered about him in his lifetime, there seeming to be no limit as to what others could dream of him attaining: King of Bavaria certainly, but perhaps even German Emperor, or maybe King of Great Britain? He's an interesting man no doubt.

The Bavarian heir was born in Munich on May 18, 1869 as Rupprecht Maria Luitpold Ferdinand von Wittelsbach and was the godson of the famous Bavarian King Ludwig II. Growing up, he was given a typical royal education, with great emphasis on religion and military training. During World War I, as was customary for royal heirs, SKH Generaloberst Kronprinz Rupprecht von Bayern took command of the German 6th Army on the Western Front. There has been alot of outright lies spread about the royal commanders in the German army being military idiots, but in fact the opposite was true. The Duke Albrecht of Wurttemberg, even Kronprinz Wilhelm of Prussia were actually very capable officers and Crown Prince Rupprecht earned a high reputation as one of the most brilliant commanders of any background during the war. At the start of the war, the Crown Prince performed a brilliant action, luring French armies into a trap and then destroying them. He performed just as solidly all through the conflict. Along with his Bavarian honors, Rupprecht also earned the Iron Cross, 1st and 2nd class, the Austrian Military Merit Medal and the prestigious Prussian Order Pour le Merite with oakleaves. In 1916 he was promoted to General Field Marshal and took command of an army group.

At the end of the war, Crown Prince Rupprecht resigned his command, though he was very much adored by his troops and many in Bavaria remained loyal to their royal family. He continued to be a major force in Bavarian politics until the rise of Adolf Hitler. Some patriotic Bavarians even considered, with the fall of the Prussian Hohenzollerns, that the Wittelsbachs should be raised to the status of German Emperor. In 1919 Rupprecht inherited another position, in the minds of the most die-hard Jacobites, that of "King Robert IV of Scotland and I of England". It was not until 1921 that he inherited the position of King of Bavaria, a throne which he did have at least some chance of restoring. Monarchism was still a powerful force in conservative, Catholic Bavaria and there was enough support for the government to return a great deal of confiscated property to the Bavarian Royal Family.

Crown Prince Rupprecht, or to his Bavarian supporters, "King Rupprecht" (though he never used the title) continued to be the focus of support for conservative Bavarians, however there was an increasing amount of attention being given to the new National Socialist Party. Adolf Hitler, throughout his rise to power, often courted the monarchists, trying to gain their support with promises of royal restorations once he had "restored order". He tried to get the support of the beloved Crown Prince Rupprecht, but the old Catholic prince would have nothing to do with the movement and became an outspoken critic of the Nazi Party and an avowed enemy of Adolf Hitler. As a result of this, when Hitler was elected to power, the Crown Prince was obliged to go into exile in Italy. In 1944, the Nazis tried to arrest Rupprecht, but he managed to avoid them, though the rest of his family were put in concentration camps. He remained an honored figure long after the war and upon his death in 1955, the German government allowed the Bavarian royal regalia to be taken from the museum and used for his funeral service.
Posted by MadMonarchist at 12:39 AM