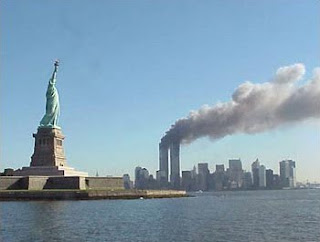 It is hard to believe that eight years have passed since the 9-11 attacks. I remember that morning very well, being up early for a dental appointment. I turned on the news and the first tower had already been hit. Everyone thought it had been some kind of an accident until the second plane plowed into the other tower. I watched it happen and you could feel the tension as everyone knew America was under attack. Word came in of two more planes being hijacked and no one was sure just how widespread this disaster would be. I remember fighter jets flying air cover over Washington DC and as I drove south the next day the bridge to Mexico was sealed off and border agents were wearing body armor and carrying M-16's. It was like nothing I or anyone else had ever experienced before. Family members in the military were called to their bases and we knew it would only be a matter of time before the game of war was afoot. However, rather than reflect on the disaster of 9-11, keeping to the "theme" of this blog, I thought it appropriate to flesh out the monarchist dimension of this crisis.

It should surprise no one that the man responsible for 9-11, the infamous coward Osama bin-Laden, is a republican of sorts. Born in the Kingdom of Saudi Arabia he is an avowed enemy of the Saudi monarchy and would like to see them replaced by a Taliban-style theocracy (picture a Sunni version of the Islamic Republic of Iran only worse and you'll be off to a good start). Likewise, it is worth remembering that the Taliban was only able to come to power after the rightful king, Mohammad Zahir Shah, had been overthrown in a coup by his prime minister. Following the destruction of the Taliban government it was, naturally, unthinkable to the US government to support the restoration of the King though he was finally able to return to his homeland and was declared the "Father of the Country" by the new republican government and, at least, monarchists were able to run for office and compete in national elections which was certainly not the case under the Taliban.

Alongside the US forces in Afghanistan many monarchies have contributed to the "War on Terror" including the United Kingdom, Canada, the Netherlands, Norway, Belgium, Denmark, Luxembourg, Norway, Spain, Australia, Japan and New Zealand. The 2003 invasion of Iraq by coalition forces proved more controversial but was at least similar to the Afghanistan case in that a usurping republican dictator was overthrown and monarchist parties were able to compete in the electoral process for the first time since the destruction of the Kingdom of Iraq in 1958 with the massacre of the King and Royal Family by pro-Marxist revolutionaries. Although that monarchy was something of a creation and certainly had its problems, it should be remembered that it was the last Iraqi government to have a working parliamentary system. So, the next time someone complains that the republic isn't working because Iraqis have "never had a democracy" you can point out that they did -under the monarchy! What the future holds for these new regimes and for the "War on Terror" or whatever the Obama government is calling it these days to avoid offending anyone, only time will tell. 9-11 is a day to remember and it should be for monarchists as well, remembering that the terrorist regimes in Afghanistan, Iran and Iraq which have been the source of so much trouble all came to power through the death of monarchies and the radical terrorists who are still causing trouble today are just as anti-monarchy (seeing it as un-Islamic of all things) as any secularist republican.
Posted by MadMonarchist at 1:19 AM

Email ThisBlogThis!Share to TwitterShare to FacebookShare to Pinterest
Labels: 9-11, War on Terror