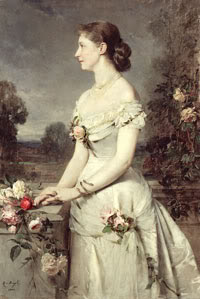 Princess Augusta Viktoria von Schleswig-Holstein-Sonderburg-Augustenburg was born in 1858 to Duke Frederick VIII of Schleswig-Holstein and in 1881 married Prince Wilhelm of Prussia, later to become German Kaiser Wilhelm II. The two had a very strong and lasting connection from the very start and enjoyed a happy marriage. She was a source of both stability and pampering to her husband who, it was said, could not survive without a woman to fuss over him. For her part, she adored her husband as probably no one else in the world. She had more artistic interests than he did but they both shared a very conservative political outlook and a very deep Christian faith. She had to endure a rough start to her married life because of her in-laws. Her sister-in-law Charlotte viewed her as of too humble in rank to marry the future German Emperor and her mother-in-law Victoria found her as unacceptable as she found virtually everything in Germany other than her beloved Fritz.

When "Dona", as she was called in family circles, became German Empress she threw herself into the traditional duties of a consort, hosting foreign guests, presiding at parties and working with the Red Cross and numerous charities; which she thoroughly enjoyed. Relations between her and her mother-in-law warmed somewhat though she was careful to guard her children from Vicky's ever-staunch liberalism. However, she was right beside Vicky when she died in 1901 and from that moment was the uncontested "first lady" of Germany. She was probably as close to a perfect match for Wilhelm II as possible. The Kaiser, with his notoriously stressed and eratic personality, could always find calm and comfort with Dona who would attend to his every need and invite him to pray with her. Sometimes this meant that she neglected herself. It was commented on that when the Kaiser would take his meals she would spend most of the time attending to him rather than eating herself and by the time she started her husband would be finished and call for her to walk with him, which she would, leaving many to wonder how she was able to keep from going hungry.

Dona certainly did her duty in securing the succession as well, giving Wilhelm 6 sons and 1 daughter. She was most attached to her youngest boy, Prince Joachim, whom she constantly worried over as he was born early following a fiery argument the Kaiserin had with Princess Sophie after she told Dona she would be converting to Greek Orthodoxy to marry the Crown Prince of the Hellenes. A very devout and committed Evangelical, Dona told her she would go to hell if she did so and the confrontation went down-hill from there. Amongst the German people Dona was adored as no one else in the Imperial family, even more consistently than the Kaiser. The war was a terrible strain on her, probably more so because of the strain it put on her husband. For the Kaiser, the chaos of a losing war put added stress on a structure that wasn't exactly up to code to start with. Nonetheless, she did all she could to give aid and comfort to her family, the soldiers and the German people.

Dona's health had started to fail even before the revolutions that brought down the German monarchy and she followed her husband into exile in the Netherlands but everyone noticed that all the upheaval had taken their toll on her. She was weak enough when word came of the suicide of her beloved Prince Joachim and most pointed to that event as being the last straw for her. She died on April 11, 1921. Her body was sent back to Germany for burial, the Kaiser having to say his last farewell at the Dutch border and even in the new republican Germany her loss was an occasion of great mourning and displays of monarchist sentiment.
Posted by MadMonarchist at 1:24 AM