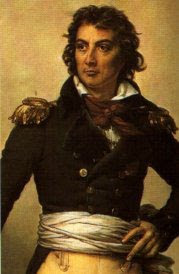 Louis d'Elbee was born in Dresden, Germany in 1752. In 1777 he moved to France, became a naturalised Frenchman and joined the French royal army, rising to the rank of lieutenant before 1793 when he married and retired to an estate in Anjou. He was soon back in action though, as a soldier of fortune in the army of the Prince-Elector of Saxony. As such, he missed the outbreak of the French Revolution but returned when a law was passed ordering all emigrants back to the homeland. He was as known for his royalist loyalty as he was for his military skill and when the people of Beaupréau rose up as part of the counterrevolution that erupted in the Vendee and Brittany they chose d'Elbee to lead them. The French Revolution is often portrayed as a popular uprising by the common people against corrupt aristocrats and yet the army d'Elbee and his troops joined was led by a peddler (Jacques Cathelineau) and a gamekeeper (Jean-Nicolas Stofflet).

Louis d'Elbee showed his skill and valor for the start in the great struggle for religion and monarchy. Soon, he was the top subordinate to Jacques Cathelineau, commander of the 'Catholic and Royal Army'. When Cathelineau was shot down in Nantes it was Louis d'Elbee who was chosen to succeed him as generalissimo of the counterrevolutionary forces. Once in charge d'Elbee led his gallant forces to victory at Coron and Beaulieu but was then defeated at Lucon. However, though it was a terrible defeat, d'Elbee displayed cool leadership and was able to withdraw his troops in good order, avoiding a route and the total destruction of his army. Sadly, the Catholic and Royal Army was hopelessly outmatched by the revolutionaries who used the most cruel and vicious methods to stamp out resistance. On October 17, 1793 d'Elbee and his forces were defeated at the battle of Cholet.

It was the end for d'Elbee but he went down like a lion, being badly wounded in combat before being overrun and taken prisoner. He was given a show trial three months later for daring to oppose the revolution and was put to death at Noirmoutier on January 6, 1794 still so badly suffering from his wounds that he had to face the republican firing squad sitting in a chair. Louis d'Elbee had not finally been victorious, but he displayed great moral courage in opposing the satanic Jacobins in the first place, showed great skill in winning a number of victories against the revolutionary forces and he went down in noble defeat for a righteous cause and earned the right to be included among the pantheon of great monarchist heroes of the French counterrevolution.
Posted by MadMonarchist at 1:00 AM