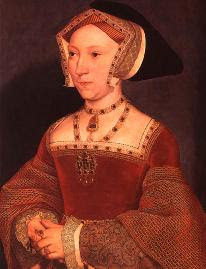 Queen Jane Seymour could well be regarded as the most successful of all the wives of Henry VIII. She was popular with the people and gave Henry his only male heir which instantly made her his favorite as can be seen by his request to buried next to her. She seemed the ideal wife and queen, but she brought with her a family that was to have quite an impact on English life long after Jane had left the scene. She was a small and quiet woman, but a woman with a devoted and courageous heart within her tiny frame. Jane was born around 1505 and when she was old enough she secured a position as a lady-in-waiting to Queen Catherine of Aragon. She was very impressed by Queen Catherine and adored her for her kindness and piety. Described as fair, pale, modest, even-tempered and of rather petite build she had the physical appearance Henry liked most and the gentle and reserved nature considered most desirable in a woman of Tudor times.

Jane first caught the eye of the King in September of 1535. By early the following year the King was obviously smitten with her, but Jane would not consent to being a mistress and made it clear that she was not the sort to return his advances unless Henry intended to marry her. The King was impressed by her modesty and morals and had to play the part of the gentleman caller, even having to put up with his meetings with Jane being chaperoned. Nonetheless, as Queen Anne was being tried for adultery things with Jane proceeded at a fairly quick pace. In fact, Anne was not even cold in the ground when Henry VIII and Jane Seymour were engaged the very next day after Anne was executed and were married less than two weeks later on May 30, 1536. Jane was the first of Henry's queens who was not crowned, but she quickly adapted to the role of queen consort and by the start of 1537 she was pregnant.

Quite unlike the demanding Anne, Jane took as her motto "Bound to Obey and Serve". All of the frivolity and extravagance of Anne was replaced with a more modest, strict and conservative household by Queen Jane. She banned all of the more immodest French fashions Anne had brought in and had all of her ladies dress in traditional, English fashions which were less revealing. Perhaps also remembering how Henry had a tendency to fall for the ladies around the Queen, she made sure that her maids of honor would not draw attention to themselves. Queen Jane was also hopeful that she could heal the religious rift in the country and her time as Queen coincided with the “Pilgrimage of Grace”. This was an uprising of northern Catholics intend on undoing the recent religious changes Henry had enacted. These people loved Queen Jane, and had more than enough strength to have overthrown Henry VIII had they desired it. However, Henry VIII used treachery to overcome them, and even used the name of Queen Jane in his deceit. He pretended to agree to all of the demands of the Pilgrims and even promised to give Jane a special role as Queen of the Catholic northern part of the country. He had no intention of doing any of this of course and as soon as the Catholics laid down their weapons he crushed them ruthlessly.

Queen Jane also hoped to bring about reconciliation in the Royal Family by having Princess Mary (daughter of Catherine of Aragon) brought back to court. Previously, Henry had declared Mary illegitimate and had subjected her to horrible humiliations and punishments and when the moment came for reconciliation, the will of young Mary finally broke. Henry changed none of his positions and Mary grudgingly recognized the King as Supreme Head of the Church, an act for which she would never forgive herself. Henry made it clear that he would never reverse himself on the religious question and he warned Queen Jane to stop meddling in politics or she would risk suffering the same fate as her predecessor. Queen Jane, ever the faithful wife, accepted this and determined to bear her sufferings in silence with only her sister Elizabeth Seymour and her sister-in-law Anne Stanhope to be her confidants.

All in all, 1536 was a year of great disappointment for Jane but everyone knew the key element was her pregnancy, which could decide her entire fate. The King did whatever he could to comfort her in her condition so desperate was her for a smooth pregnancy ending in the birth of a son. Jane gained a lot of weight and Henry even had quail brought in from Calais in France and from Flanders to feed her cravings. About a month later, on October 12, 1537 the long sought after dream of Henry VIII came true when Queen Jane gave birth to a son, the future King Edward VI of England. Henry was overjoyed and again Jane was the perfect woman in his eyes, the wife who had given him what he wanted most and what none of his others had been able to: a son and heir. Yet, the jubilation, sadly, was not to last long. Queen Jane, weakened by the birth, contracted puerperal fever and died a short time after on October 24 in her palace at Hampton Court. Henry VIII mourned her as he had no other. Despite her foray into politics, she had been his ideal woman, the one who had made everything right. He had her buried in Windsor Castle in a magnificent tomb he had built for the two of them there, and where he would one day join her.

Posted by MadMonarchist at 12:31 AM