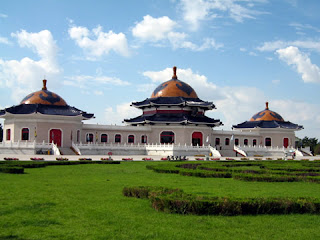 The intrepid monarchist visitor to China will find many destinations worthy of visiting from the monumental imperial tombs, the massive Forbidden City, the vivid Summer Palace and so on. Less known, however, is the tomb of Genghis Khan in Inner Mongolia autonomous region. The first point to address is that the great conqueror is not actually buried there. Upon his death, Genghis Khan was buried in an unmarked grave somewhere in Mongolia, but for such a hugely significant figure, it was inevitable that some lasting monument of this sort would be built. Few would have guessed that it would be done by the communist People's Republic of China. The mausoleum was built from 1954 and 1956 to contain important relics of the Khan, items of his and eventually the remains of members of his family. This was part of a concerted effort by the Red Chinese to co-opt the legacy of Genghis Khan from the Mongols and claim him as some sort of pan-Chinese champion; something which would have likely baffled Genghis Khan himself.

As can be seen the mausoleum was built in the style of Mongol gers linked by a central hallway. A monument to Genghis Khan sits in the center and the complex is surrounded by gardens. The Mongols outside of China, in Outer Mongolia, had very mixed feelings about the mausoleum; pleased on the one hand with the monument to their national hero, but angry about the Chinese effort to claim him as their own. They could clearly see the mentality behind it as a threat to their independence. Make no mistake about it, the Communist Chinese have never forgotten that all of Mongolia was once under the rule of the Great Qing Empire and in candid moments will admit that after Taiwan is retaken they intend to see Outer Mongolia ruled from Beijing as well. However, the mausoleum was almost destroyed by the Chinese themselves.

During the "Cultural Revolution" Red Guards, whipped into a communist frenzy against all remnants of China's monarchist past, looted and nearly destroyed the mausoleum which had been completed not too long before. Many priceless artifacts were lost forever before the country finally settled down and the Chinese government began to rebuild and restore the mausoleum. Sadly, many of the original relics and artifacts had to be replaced with reproductions. Today the Chinese government is back on track, using the mausoleum as they had first intended, but not all who gather there or visit agree with their goals. Ceremonies are held several times a year in honor of Genghis Khan, sometimes even attended by dignitaries from independent Mongolia. Regardless of the intent behind it, it is a stunning monument and well worth visiting for those who are drawn to the more remote corners of the world.
Posted by MadMonarchist at 12:58 AM