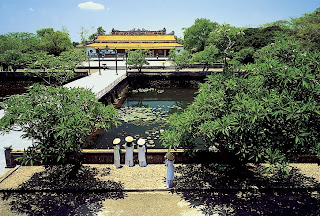 This is the first post of a new series on some of my favorite places of monarchial interest, generally out-of-the-way, off the beaten path or relatively unknown alongside the likes of Buckingham Palace, Versailles or Schoenbrunn. Today, I start with the capital city of the last Vietnamese imperial dynasty: Hue. Of the many monarchial sites in Vietnam the city of Hue is definitely at the top of the list because of the majestic Holy Citadel, the grand and tragic Forbidden City within its massive walls and the hauntingly beautiful imperial tombs in the valley up river. The Forbidden City of Hue was built by the founder of the Nguyen dynasty, Emperor Gia Long, in 1804 and was built to be a more humble version of the massive Forbidden Purple City in Peking. However, the citadel also shows the early French influences as it is clearly built in the style of Vauban, at least as far as the fortifications go. True, it cannot match it's Chinese counterpart in sheer size, but I find the Forbidden City of Hue more intoxicating because of the way it was laid out to be in humble harmony with the surrounding mountains and natural beauty rather than trying to surpass them.

Sadly, most of the innermost city, where the Emperor actually lived, was destroyed in the Tet Offensive of 68. However, there is still more than enough to see. Particular favorites are the Thai Hoa Dien or Palace of Ultimate Peace which remains untouched and houses the Golden Dragon Throne. It is the first building you will see upon crossing the moat and passing through the imposing Ngo Mon Gate. Another interior building which cannot fail to impress is the temple of the emperors where large altars still stand for the veneration of 10 of the 13 Nguyen emperors. Ceremonies are still held here, and almost always have been, in the old days by the faithful few, nowadays with official assistance as a tourist attraction (don't get me started). Hue abounds with magnificent monuments and temples of the imperial past and the tombs (where all but two emperors now rest) cannot be missed.

The tombs of Emperors Minh Mang and Tu Duc are usually upheld as the most beautiful and the most perfect in terms of the traditional Asian style. I also must point to the unique tomb of the much-maligned Emperor Khai Dinh whose tomb is, I think, a very striking combination of French and Asian styles, blended together in a way that comes out very well in my opinion. The intricate detail and masterful craftsmanship that went into these buildings and continues in their maintainence is awesome. Sadly, much was allowed to decay following the communist takeover though it still had a haunting, majestic beauty to the place. Today tourism is helping in repairs but also increases a disgusting commercialism in my view. Call me a stick in the mud but I hate things and places once held sacred being treated as mundane for the sake of t-shirt wearing, gum popping tourists even if my own countrymen are among them. Nonetheless, if you ever happen to be in the area, a visit to Hue will not disappoint. The mystery and majesty still remains. I can think of no better description than that which the old Vietnamese gave to Hue hundreds of years ago. The city of Hue has the grace, serenity and beauty of a sleeping princess.
Posted by MadMonarchist at 1:30 AM