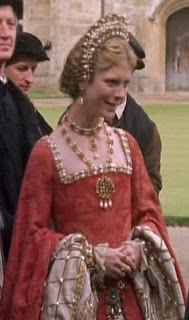 Today's Cinema Royal is Emilia Fox as Jane Seymour in the 2003 HBO-ITV movie Henry VIII. There should be no doubt that Emilia Fox would be good at her job since this kickboxing London girl has acting in her veins being the daughter of Sir Edward Fox OBE. She was very believable in her part and I think presented an image of Jane Seymour that is not often considered. In this film, Jane Seymour, a devoted wife, is also a faithful woman with strong opinions and firm principles. Emilia manages to strike the right balance I think between pushing for what she believes in and being a good Tudor-era wife, which is what the real Jane Seymour had to do. She comes across as a good, devout woman, a faithful Catholic who wants to see reconciliation in the Tudor family as well as between England and Rome. She brings down the wrath of her husband because she feels so strongly about this and yet Emilia is believable as a wife who cares about the soul of her husband and wants him to see the error of his ways and return to the embrace of the Church. Her best scenes are the pride in her face as Mary is brought back to court and she tells her how the King has changed and has agreed to the restoration of the old Church and when Henry VIII blows up at her for interfering, the second time becoming violent at which point she goes into labor. Her talent definitely shows in those moments. Some have dismissed the idea that Henry ever struck Jane, but I don't think it totally impossible as he had already beheaded his last wife and threatened (though we don't know how seriously) Jane with a similar threat if she continued to try to advise him on political and religious matters. Emilia is a lovely Jane.
Posted by MadMonarchist at 12:45 AM