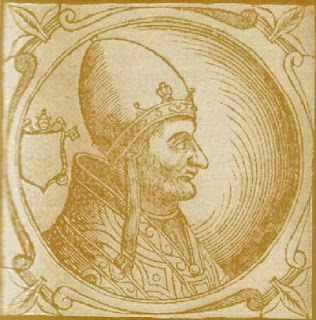 Given the many centuries in which England was a cornerstone of Catholicism in Europe, we can, perhaps, be a bit surprised that there has been, to date, only one English Pope in Church history, which was Pope Hadrian IV. I have often thought of him in comparison to the only Dutch Pope, his successor Hadrian VI. Aside from both being the only son of their native lands to ascend the Petrine Throne, both had almost insurmountable problems to deal with as Pontiff.

Hadrian IV was born Nicholas Breakspear and spent his early life around St Albans, Hertfordshire. He was devoted to the Church from an early age, but was thwarted by the twofold disadvantage of education and ethnicity. The two problems were joined since, young Nicholas was a Saxon, which was a serious block to advancement in an England dominated by the Normans. However, Nicholas did not let the situation discourage him. Rather, he traveled to Arles, France and made an even more determined effort to better himself.

Eventually, Nicholas moved closer to the Papal city of Avignon where, after only coming for a visit, he was eventually made abbot of the monastery of St Rufus. While on business in Rome, the English abbot managed to impress Pope Eugenius III enough to keep him in the Eternal City and bestow the red hat on him. One of the assignments for which Cardinal Breakspear became famous was the establishment of the archbishopric in the Kingdom of Norway. Despite his early experiences in England, Nicholas was to rely heavily on the Norsemen after receiving the tiara.

Not long after coming back to Rome, Nicholas Cardinal Breakspear was elected Pope on December 4, 1154, taking the name Hadrian. At one point during his reign, Hadrian IV was reported to have said that he came to wish he would have stayed in England. Certainly no one could blame him. Troubles surrounded the English Pope from the start. The first of his troubles came from Arnold of Brescia who at one point occupied Rome and assassinated Cardinal Gerardus. In response, setting yet another precedent, Hadrian IV placed the Eternal City under the interdict until order was restored.

Another thorn in the side was the Holy Roman Emperor Friedrich Barbarossa. He wanted the Pope to formally crown him, which Hadrian was willing to do provided that the Emperor hold his stirrup while he mounted his horse in a traditional show of respect. The Emperor refused until learning that Kaiser Lothair had done the same, after which he consented. However, when the time came he performed the function in a mocking manner. Nonetheless, the Pope felt obliged to crown the Emperor, for which he was attacked by the proud Romans. Friedrich put down the revolt then rushed back to Germany before his record could be tarnished.

Following this episode, Hadrian IV was attacked by King William of Sicily, whose victorious army forced a number of concessions from the Pope. This gave Kaiser Friedrich an opportunity to invade Italy, but this time the Pope united the Lombards in a Holy League to stop the Germans. Yet, one last controversy remained. This was a bull by Hadrian IV which granted King Henry II of England the right to claim Ireland as his own. Some have doubted the authenticity of the document, but even assuming, as seems to be the case, that Hadrian IV did issue it, it clearly reads as an act done in the best interests of the Church and the Irish people, as odd as that sounds in hindsight but which should be understandable given the condition of Ireland at the time.

Pope Hadrian IV died in 1159, ending a reign filled with fights against the Roman Republic and Commune, the Emperor, the Sicilians and bitterness from Ireland, but the reign of a man who stood up against the most powerful men of the day, upholding the supremacy of the Church and the Papacy, without blinking.

Posted by MadMonarchist at 1:13 AM