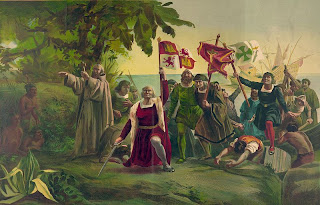 Today is Columbus Day and it seems that the more controversial and "politically incorrect" Columbus becomes the more I feel like supporting and defending the memory of the man. About the only zealous supporters of Columbus Day these days are the Italian-Americans who are none too happy when their most famous Genoese countryman is slandered. First, I should probably dismiss a few things right off. Yes, Columbus was not the first European to "discover" America. The Vikings were certainly in the New World long before and numerous other evidence suggests possible visits by others as well. However, Columbus' voyage was the one that mattered. It was his voyage that permanently put the Americas on the map, it was his voyage that started the exploration and colonization of the Americas. Others that preceded Columbus left hardly a trace but the voyage of Columbus changed the world.

Most outrageous, however, is the effort by many today to portray Columbus as some sort of genocidal villain who is responsible for the deaths of multitudes of Native American Indians. To say that is absurd is putting it lightly. It would be like blaming the first merchant to travel the Silk Road for the Black Death. It is also a slam against Spain's great Queen Isabella I who was very specific in her instructions that though she considered converting the Indians a major reason for the voyage she also said that they should be "treated as free people, for such they are". This also relates to another reason why Columbus is so hated by those on the radical, leftist fringe; he was a very religious man who was dispatched on his voyage by very religious monarchs. Spreading Christianity was part of his mission and there are those today who consider this a greater plague than the diseases brought along with them. Those people I really do not understand as, Christianity had and has its problems but no one is performing human sacrifices on top of pyramids anymore and one would think that would be considered a good thing.

Columbus should be given credit for his remarkable accomplishment and he should not be blamed for every ill that followed in his wake. No one intends to spread disease and although the Indians were at times treated bad, they were not treated as an "untouchable" class or we would not have the modern Latin American people, tha majority of which are descendants of Spanish and Indian ancestors. I also think it does people good, especially as they grow more powerful in the world, to look back at those Spaniards, Italians, English, French etc and say, because of these intrepid few, our countries exist today.
Posted by MadMonarchist at 10:56 AM