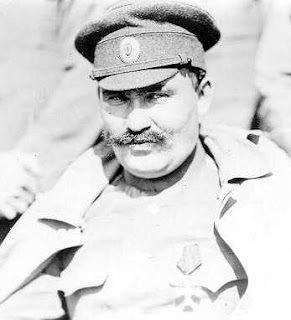 General Grigory Mikhaylovich Semyonov was a half-Buriat, half-Cossack born on the frontier of eastern Siberia in 1890. In 1908 he joined the Imperial Russian Army, graduated from Orenburg Military Academy in 1911 and during World War I rose to the rank of captain in the Trans-Baikal Cossack host. He served on the Persian front and was planning to raise an all-Buriat regiment when the revolution broke out that toppled the Romanov dynasty. The Provisional Government sent him to oversee the Transbaikal region and he became a general of the White Russian forces there and instigated an uprising against the Bolsheviks but was ultimately defeated by the Red forces. During this time his chief partner was Baron Roman von Ungern-Sternberg but unlike his more reactionary friend Semyonov favored a more modern form of constitutional monarchy, even if the constitution was mostly symbolic. The two eventually went their different ways.

From Chita, Semyonov tried to set up his own autonomous government with the support of the Empire of Japan which was looking to extend its influence in Siberia. He set up a very cosmopolitan court around him including Russians, Mongols, Japanese, Manchus and even had a unit of entirely Jewish volunteers. When the Kolchak government fell Semyonov inherited command of the remaining counterrevolutionary forces but, with the Allies pressing Japan to withdraw her support, his forces were left to live off the land and eventually crossed the border into Manchuria by the autumn of 1912. While there he tried to keep the flame of White Russian resistance alive and also forge alliances with Manchu and Chinese monarchists. He was, for a time, on the payroll of the last Emperor of China who mentioned Semyonov in his memoirs as the most prominent of the Russian exile community offering to assist in his restoration.

However, revolutionary republican pressure finally forced him out of Manchuria as well and he relocated to Nagasaki, Japan before moving on to the United States. He had, however, got on the bad side of several members of the AEF-Siberia and legal troubles forced him out of America and he went back to Manchuria where he was given a pension by Japan and worked in cooperation with the Japanese and the Russian exile community against their common Soviet enemy. He remained there during World War II and in 1945, during the Soviet invasion of Manchukuo, Semyonov was captured by Red Army paratroopers and the following year was slowly and brutally executed as a counterrevolutionary by Bolshevik kangaroo court. Although he gained a rather unsavory reputation at times, and was in the end unsuccessful in his crusade, Semyonov is still widely remembered as one of the most prominent White Russians and a near legendary figure in the Far East.
Posted by MadMonarchist at 12:25 AM