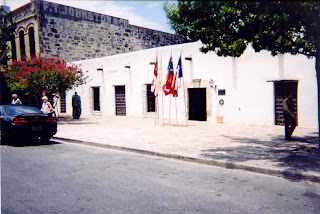 Drive past the old City Hall in downtown San Antonio and you will find the humble building that was once home to the capital of Texas. Originally the Commandancia, home of the commander of the troops guarding the city, it later became the official residence of the Royal Governor of the Province of Texas, part of the colony of New Spain. It was completed in 1749, and the original keystone displays the words "ano 1749-se acabo" under the coat of arms of the monarch of the time, King Ferdinand VI of Spain. In front are the famous 6 Flags of Texas. As you walk in, look up and you will notice the original keystone above the main entrance to the palace, bearing the coat of arms of the Spanish King. It is interesting to see that these are the arms of the House of Hapsburg, one of the most ancient and respected dynasties in Europe which supplied many kings of Spain, Holy Roman Emperors, and Emperors of Austria. Due to the work involved, and the remote location, it is naturally a much simpler version of the arms than would be seen elsewhere. However, at the time the palace was built, after 1700, the Hapsburgs no longer ruled Spain, having been replaced by the Bourbon Dynasty of present day. The last Spanish King to rule over Texas was King Ferdinand VII. 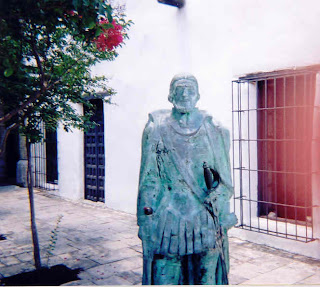 Outside the front door to the palace, visitors will be greeted by a large statue of a Spanish Conquistador, given to Texas by Spain in the 1970's as a reminder of the historical ties between the two countries. It was the conquistadores who were the first Europeans to set foot in Texas and officially claim the area for the King of Spain. However, though the conquistadores won the glory and riches, it should not be forgotten that most of the real colonization and all that it implies was done by the Franciscan missionaries who accompanied the conquistadores, winning souls to Christ and spreading the Spanish culture.
The palace has been restored with antique period items from the Spanish colonial era and reflects the differences of those good ol' days. After coming inside, and paying the very modest tickett fee, the first room to your right will be the small chapel, where the Royal Governor and his family attended to their spiritual needs. There is a lovely carved statue of Our Lady, crowned and holding the Divine Child at the back of the room. There are antique wood carved crucifix's, portraits of saints and Jesus, as well as a small container for a holy relic. The constant religious objects throughout the palace speaks of the devotion during that time and the strongly conservative, Catholic nature of the Spanish Monarchy and House of Hapsburg or Bourbon. Scarcely a single room is without some sort of religion icon if not several of them, including images, statues, crucifix's and a large antique rosary. 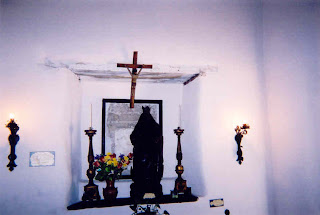 Moving on you will see the kitchen and the official dining room where the Royal Governor would hold banquets, as lavish as possible on the remote colonial frontier. There is an antique wine chest and a lavabo for the washing of hands before the meal that was a religious practise at the time. The room features a framed mini-flag of the Spanish regiment that occupied the city as well as an icon of San Antonio de Padua, the saint for whom the city was named. The back patio is a lush, walled-in mini tropical paradise dominated by the lovely central fountain. Naturally, it is believed that a coin dropped in the fountain will grant a wish. Pebbled walkways wind through a tangle of local trees and bushes, including clumps of palm and banana trees. This is the area most often seen in pictures and post cards of the Governor's Palace (which are available of course) and given the serene feel of the garden, it is no wonder why. The vine-covered portico is a good place to relax, the stone benches also carved with the double-eagle (though for picnic comfort go for the wooden benches). 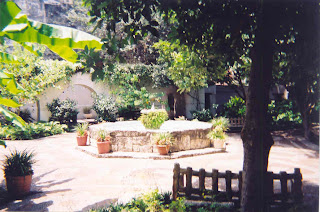 One can also see many items of interest in the Royal Governor's office. Monarchist visitors will notice signed letters from HM King Juan Carlos of Spain on the wall, speaking of the very long and deep ties between Texas and the Kingdom of Spain. There is also a woven wall-hanging in the office, bearing the names of the first families to come to San Antonio de Bexar in 1731 during the reign of His Catholic Majesty King Philip V. The first settlers were mostly natives of the Canary Islands. Because of the history of the place in part, it must be said, the Governor's palace is often listed as the most beautiful home in the Lone Star State. Some might smirk at so humble a home being called a palace, but for the time and place it was and homes such as that were often referred to as palaces, such as the Veramendi Palace and others. For any monarchist visiting the "Alamo City" it is a must-see and usually free of the throngs of tourists at said Shrine of Texas Liberty and the historic mission trail.
Posted by MadMonarchist at 2:21 AM