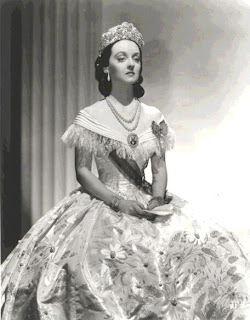 Bette Davis was at her typical best in the 1939 bio-pic "Juarez" as the tragic Empress Carlota of Mexico. The superb cast included Paul Muni as Benito Juarez, Brian Aherne as Emperor Maximilian (who was nominated for the best supporting actor Oscar for his performance), the always excellent Claude Rains as Emperor Napoleon III, Gale Sondergaard as Empress Eugenie, John Garfield as General Porfirio Diaz and Donald Crisp as Marshal Achille de Bazaine. However, Bette Davis easily captivated the audience as Empress Carlota, bearing at least a passing resemblance to the Belgian empress and, on the whole, giving a fairly accurate portayal of the woman. She mentions that it was she who pressed Maximilian to accept the Mexican throne and she effectively conveys the idealism that Carlota had for what she and her beloved Max could make of Mexico as well as her fiery determination in times of crisis. In this film Carlota is made ignorant of the fact (though Max and his doctor are not) that she can have no children and one of the most moving scenes is her heartfelt prayer in a candle-lit cave before a statue of the Virgin of Guadalupe to give her a son so that her husband's throne might be secure. Her scenes with Maximilian are truly moving and their on-screen relationship totally overshadows the story of the wooden, plodding Benito Juarez. She is heartbroken at the idea of adopting an heir from the Iturbide dynasty but, once persuaded that this is best, accepts the boy as her own. Still, her best scenes are the most tragic as she journeys to France for a showdown with Napoleon who has left them in the lurch. Her descent into paranoia and madness must rank as one of Bette Davis' greatest performances in her illustrious career. "Juarez" is a movie well worth seeing, even if one must skip through the scenes featuring the president, and although not entirely historically accurate it does get many things right. It is guilty more of the over-glorification of Juarez rather than slandering or vilifying Carlota and Maximilian. A great performance and one of my personal favorites.
Posted by MadMonarchist at 12:21 AM