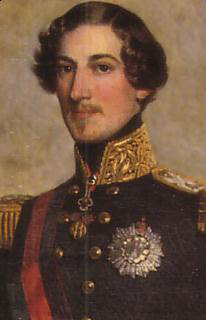 Ferdinand II was, in turn, royal consort of Portugal, co-monarch of Portugal and regent of Portugal during his life. He was Prince Ferdinand Augustus Francis Anthony of Saxe-Coburg-Gotha-Kohary on October 29, 1816 to Prince Ferdinand of Saxe-Coburg and Gotha and his wife Princess Maria Antonia Kohary de Csabrag and spent his youth moving around Slovakia, Austria and Germany. As part of the Saxe-Coburg-Gotha family he was a nephew of the Belgian King Leopold I and first cousins with King Leopold II of the Belgians, Empress Carlota of Mexico and Queen Victoria and Prince Albert of Great Britain.
In 1836 Prince Ferdinand married Queen Maria II of Portugal, daughter of King Pedro IV of Portugal, Emperor Pedro I of Brazil. In September of the following year Queen Maria gave birth to their first child, a son and heir, at which time, according to Portuguese law, her consort became King Ferdinand II of Portugal. Like many of his family Ferdinand was a very modern-minded man of a very artistic nature. He also proved himself to be quite an adept administrator and intelligent monarch. King Ferdinand and Queen Maria were a devoted couple and worked well together, proving themselves a winning team for the Portuguese monarchy. In 1838 he built the magnificent Pena National Palace near Sintra, one of the most unique royal palaces in the world, often compared to Ludiwg II’s Neuschwanstein because of its mixture of various architectural styles. When his wife was pregnant Ferdinand II ruled the country alone and this happened fairly frequently as Queen Maria II had 11 children during their marriage though only 7 survived.
It was the birth of the eleventh child, who did not survive, that took the life of Maria II in 1853 and the reign of Ferdinand II came to an end. However, he still stayed on to serve as regent for his 16-year-old son King Pedro V until 1855. He instilled in his son the need for Portugal to modernize, build up its infrastructure, industry and so on as well as making sure he retained a compassionate nature. After retiring from active involvement in politics Ferdinand was able to focus on those artistic causes dearest to him. He also remarried to Elisa Hensler, Countess of Edla, an opera singer and the two lived in the Pena National Palace where he entertained a long succession of the great artists of his time. The former King himself was quite skilled at etching, painting and making pottery and was president of the Royal Academy of Sciences and the Arts as well as lord-protector of Coimbra University. In this peaceful, artistic environment, he spent his final years with his wife by his side until his death on December 15, 1885.
Posted by MadMonarchist at 2:38 AM