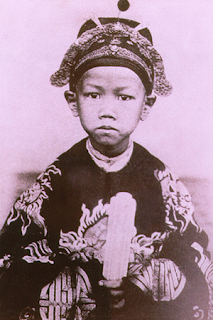 Of the latter Nguyen dynasty emperors of Vietnam, probably none are so popular amongst Vietnamese today as the boy-king Duy Tan. He was born on August 14, 1899 to Emperor Thanh Thai as Prince Nguyen Vinh San. He succeeded his father on the Golden Dragon Throne in 1907 at the age of 7 and took as his reigning name Duy Tan, "friend of reforms". His father had been replaced on grounds of insanity but also for being uncooperative with the French. It was hoped that a younger boy could be groomed to be a better friend of the protectorate and a model colonial monarch. To add stature his courtiers added a year to his age so many history books record him as being enthroned at age eight.

Choosing which son would succeed Thanh Thai was not a forgone conclusion. When the time came to make the choice Prince Vinh San was absent and later found chasing crickets. The French immediately decided that a boy so uninterested in imperial matters would be their best choice and so he was enthroned as Emperor Duy Tan. The French would later be proven wrong. Emperor Duy Tan became an extremely devoted and concerned monarch who was determined to set his country free. From the very begining the child-emperor was surrounded by advisors and tutors that were friendly towards France. This included the Council of Regency that was to govern until Duy Tan reached his majority. However, as he grew older Emperor Duy Tan became quite adept at getting around the many spies in his court. While he has been described as a Francophile, Duy Tan nevertheless opposed the excessive aspects of French rule and called for a revision of the Patenotre agreements of 1884.

Even at a young age the Emperor also instituted tax relief and the lessening of chore duties, he eliminated wasteful court protocals, cut back on government spending and reduced the salaries of high officials, including his own. When the French violated the tomb of Emperor Tu Duc he was enraged and protested vehemently. Emperor Duy Tan announced that as the "Son of Heaven" it was his right and his duty to manage Vietnam's affairs. Shortly after this, the Emperor and a small group began planning a rebellion against the French protectorate. The 16-year-old monarch even took to the water and encouraged the people to revolt from his junk with a loud-speaker. Unfortunately, one of the collaborators turned the others in to the French garrison in Annam.

The Governor of French Indochina asked the Emperor to reconsider his actions, and more or less repent for his "treason". Duy Tan replied, "If you compell me to remain Emperor of Annam, you should consider me as an adult emperor. I should need neither the council of regency nor your advice. I should manage the country's business on the same footing with all foreign countries including France." With that announcement it was clear to Paris that Emperor Duy Tan had to go. The other collaborators confessed their crime on the condition that Duy Tan not be executed. They were beheaded at An Hoa still repeating, "The sky is still there. So are the earth and the dynasty. We wish long life to the Emperor." Duy Tan was excused on the grounds that he was a minor and on November 3, 1916 he was exiled from Vietnam with his father. After this, most Vietnamese royals gave up hope of resisting the French occupation.

Emperor Duy Tan, known officially again as Prince Vinh San continued to do what he could to help his nation in any way possible. During World War II he even joined the Free French army as an interpreter to help the Allied cause. With all of the problems Vietnam had been going through because of the war and the Japanese effort to set up an independent "Empire of Vietnam" some French officials, particularly Charles DeGaulle, began to consider restoring Vinh San to the throne as he had seemingly proven his friendship toward France but was still widely popular as a nationalist hero in his country. However, the rumors, secret talks and hopeful aspirations were to come to nothing. He was on his way back from Europe, where he was serving with the occupation forces in Germany in late 1945 his plane mysteriously crashed over the African wilderness and the former monarch was killed. His ashes were interred in the Central African Republic until 1987 when the Socialist Republic of Vietnam allowed his remains to return home. On April 4th Vietnam saw a glimpse of it's old imperial splendor when the ashes of Emperor Duy Tan were laid to rest in the old capitol city of Hue, in the tomb of his grandfather Nguyen Duc Duc, with all of the pomp and ceremony of a happier time.

Posted by MadMonarchist at 12:43 AM