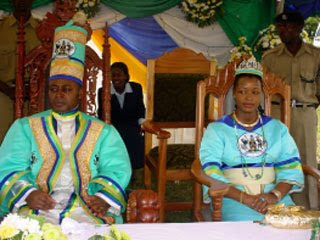 The Republic of Uganda, as most monarchists know, has several ceremonial monarchs reigning on the tribal level. Now, they have one more. Charles Wesley Mumbere was working as a nurse's aide in the United States, no one knowing anything about his ancestry or that for the last few years he had been calling on the Ugandan government to give him official recognition as a king. He was crowned in 1966 as King of the 300,000-strong Rwenzururu nation. However, the "King of the Mountains of the Moon" began as a teenage rebel fighting alongside his father in a war of secession against the neighboring nation of Toro. Mumbere inherited the kingship upon the death of his father but was confined to struggling in the wilderness until he obtained a government scholarship to study in the U.S. Later, Uganda shut off his cash flow and he had to leave school and begin working as a nurse's aide. He said he chose the profession because it promised steady work.

Now, after finally obtaining the blessing of the republican government, the King is back and was welcomed at a colorful celebration to marke his formal restoration to his ancestral throne. He was warned by the President to stick to cultural issues and to stay out of politics (yeah, because the politicians are doing such a great job on that front) but all is not peace and stability for the restored royal. At least four other men are claiming kingship over disputed areas of the Bakonzo-Bamba and have been trying (without success) to raise legal roadblocks to the restoration.
Posted by MadMonarchist at 2:14 PM