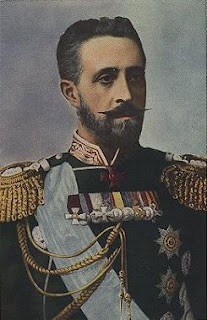 Grand Duke Nicholas of Russia was the grandson of the "Iron Czar" Nicholas I and thus a first cousin to his sovereign Czar Nicholas II. He was set on the path of a military career early in life and served on the staff of his father in the Russo-Turkish War, earning himself a high reputation for his skill and courage and was rewarded in 1884 with command of the Guards Hussar Regiment. He was everyone one would expect of a good Russian general. He was a strict disciplinarian, but also a father figure to his men; a Russian nationalist, an advocate of pan-Slavism and devoutly Russian Orthodox praying several times a day. He favored the simple, rustic life of the Russian countryside to city life at court and held to a romantic view of the rural Russian peasantry. Denied a command in the war with Japan he was instrumental in forcing Czar Nicholas II to give in to the demands for limited reforms in 1905, an act for which the Czarina Alexandra never forgave him and was to greatly trouble his command in World War I.

After the outbreak of war in 1914 Grand Duke Nicholas was called in to take command of the largest army the Russian Empire had ever assembled although the established war plans were not his own and he had never commanded an army in battle before. He was widely respected and popular with the troops but Russia suffered from the lack of a coherent staff and command structure such as the Germans had established on the Prussian model. As a result he often was reduced to being 'umpire in chief'. Nonetheless, given the inferiority of his army in virtually every area save sheer numbers he was able to win some successes. He was, for instance, decorated with the St George Cross for the Russian victory at the siege of Przemysl. However, he could not best his enemies at court where he was opposed by Rasputin and Alexandra. Thus, in 1915 the Czar made the fateful decision of dismissing his cousin and taking command of the Russian army himself.

In the aftermatch Grand Duke Nicholas was assigned to the Caucausus front where he won a string of victories over the Ottoman Turks, advancing southward and sending troops to link up with the British in Persia. After the Bolshevik revolution he went into exile in Italy and later became the leading figure in the monarchist movement among Russian exiles. With General Pyotr Wrangel he led the Russian All Military Union and was a marked man as a special enemy of the Soviet Union. They carried out a number of small, clandestine attacks on the Soviets before the Grand Duke's death in the south of France in 1929.
Posted by MadMonarchist at 12:29 AM