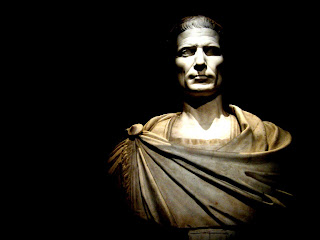 Just when you thought that the glorification of "the One" could reach no more absurd depths an Obama appointee, one Rocco Landesman, now Director of the National Endowment for the Arts, has compared the President to someone held by many (including Alexander Hamilton) to be the greatest man who ever lived; Julius Caesar. To quote the new artsy moron-in-chief, "Barack Obama is the most powerful writer since Julius Caesar". Fellow faithful, I am aghast. Just when you think you've heard it all someone compares the President to Julius Caesar, forefather of that masterpiece of ancient civilization the Roman Empire. Just to be clear about the record here, Obama rose to office in Illinois mostly by legal tricks that got his competition thrown out, was a junior senator yet to finish his term in office, most known for his multitude of "present" votes before being elected President. Since taking office, with a commanding majority in the House and Senate Obama has accomplished nothing, lived up to none of his promises and was awarded the Nobel Peace Prize for basically doing --nothing! Compare that to the accomplishments of Julius Caesar who conquered what is now France, Holland, Belgium, western Germany, led two expeditions into Britain, defeated the armies of Pompey in the Roman Civil War and was prepared to embark on further expansion to the east when he was murdered. However, the awed but noble Romans of ancient times still had more integrity than Obama's modern sycophants. They at least waited until after Caesar was dead to declare him a god whereas Obama, poster-boy of the "me" generation must have all of his accolades now, whether he has earned them or not.
Posted by MadMonarchist at 3:13 AM