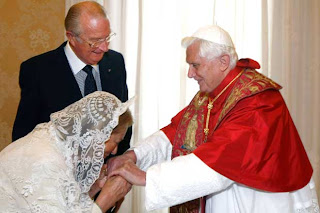 Their Majesties King Albert II and Queen Paola of the Belgians met with HH Pope Benedict XVI in Rome on the occasion of the canonization of five new saints, one of which was St Damien of Molokai, a Belgian priest who served the afflicted people of the leper colony of Molokai island in the Kingdom of Hawaii, eventually contracting the disease himself, as expected, and passing away in 1889. For a country as relatively young (at least in its current form) as the Kingdom of Belgium the ties between the Belgian monarchy and the Holy See are very strong. During the Risorgimento in Italy many Belgians went to fight in defense of the Papal States with the Papal Zouaves. It was a Belgian, Msgr Xavier de Merode, whom Bl. Pope Pius IX appointed Minister of War to deal with that crisis. After the war the Belgian royal court sent the "prisoner of the Vatican" a very magnificent papal tiara (one of my favorites) to show that his authority remained untouched in the hearts of the faithful. King Albert I and King Leopold III were well known for their devout faith and the late King Baudouin was the last living knight of the Papal Supreme Order of Christ; then the highest papal honor possible given only to Catholic heads of state for certain actions or occasions by the Pope himself. King Albert II and Queen Paola previously attended a special mass in honor of St Damien before going to Rome for the formal canonization in St Peter's Basilica.

Posted by MadMonarchist at 3:11 PM