The End of the Portuguese Monarchy 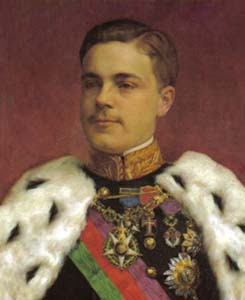 It was on this day in 1910 that the Kingdom of Portugal came to an end with a military coup, supported by republican agitators that forced King Manuel II into exile in Great Britain. Having barely survived the murder plot which took the lives of his father and brother in 1908 the young Manuel II tried desperately to save the Portuguese monarchy despite being unprepared for the throne. He dismissed the previous government and tried to make a fresh start but the tide of treason had grown too strong and ultimately the Kingdom of Portugal was washed away by it. The glorious era of Portuguese history had ended; the era which had seen the country win its independence, blaze trails in the fields of cartography and exploration, build up the first global overseas empire and for a time become one of the wealthiest nations in Europe. The period that was to follow would be one of a quick succession of ineffective and failed republican governments and the continued decline of Portugal in Europe. Some did try to restore national greatness, but no government long survived. However, the monarchist cause remains alive in Portugal, bent but not broken, and with a prominent and active heir to the throne there is at least some cause for hope that the horrendous error of October 4, 1910 may someday be corrected and the Royal House of Braganza restored to its proper place on the throne of Portugal.
Posted by MadMonarchist at 1:56 AM