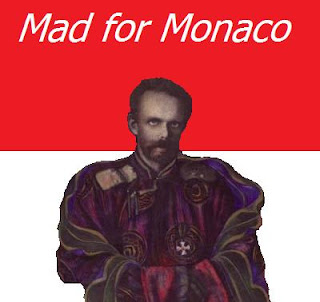 For those not keeping up with the "sister blog", some recent posts which might be of interest to Mad Monarchist readers include bios of Lord Charles II, the patron of Monaco St Devote which ties in with his story, a series of posts on the Casiraghis who are the younger face of Monaco; Andrea, Pierre and Charlotte and the latest about Prince Albert II and Belgium's Princess Astrid at the premiere of the film "Oceans". Lots of stuff there, not updated as often as this blog, but if you want to know about the history and monarchy of Monaco and keep up with the Grimaldis check out Mad for Monaco.

Posted by MadMonarchist at 5:11 PM

Email ThisBlogThis!Share to TwitterShare to FacebookShare to Pinterest
Labels: Mad for Monaco, Monaco