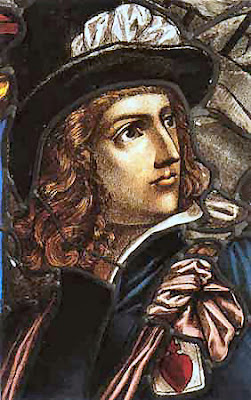 Easily my favorite of the great French royalists, Henri du Vergier Comte de la Rochejaquelein was a dashing young monarchist, the youngest general of the Catholic and Royal Grand Army, and his youth, noble background and great zeal and audacity made him something of a celebrity of the counterrevolution. Of the entire effort probably the two most well known leaders of the uprising in the Vendee were the common coachman Cathelineau and the young nobleman Comte de la Rochejaquelein. He was born on August 30, 1772 in the Chateau de la Durbelliere, Saint-Aubin-de-Baubigne, near Chatillon. Like many young men of his background he was destined for a military career early in life.
Rochejaquelein was an officer in the Constitutional Guard of King Louis XVI and first saw action on August 10, 1792 when he tried to defend the Tuileries Palace from revolutionary mobs. After returning to his home he avoided being drafted into the republican army by refusing to apply for the levé e en masse; a revolutionary innovation that gave the world the concept of the ‘nation in arms’. In April of 1793 he joined with his cousin, the Marquis Louis-Marie Lescure at his estates in Poitou to join the counterrevolutionary forces.
In no time at all the cousins were fighting republican revolutionaries alongside Maurice d’Elbee and the Marquis de Bonchamps. Rochejaquelein showed great skill and bravery and was a very inspiration figure. His handsome youth and great courage made him a natural leader that his troops would follow anywhere. He once gave an order which has become one of the most famous phrases of the counterrevolutionary forces, "Mes amis, si j'avance, suivez-moi! Si je recule, tuez-moi! Si je meurs, vengez-moi!" - "Friends, if I advance, follow me! If I retreat, kill me! If I die, avenge me!"
With only a few thousand peasants under his command Rochejaquelein won his first great victory on April 13 and on May 3 fought in the victory at Bressuire, then at the battle of Fontenay-le-Comte on May 25 and the battle of Saumur on June 9. Showing great leadership again, he inspired the Vendee army to fight on when they were on the threshold of giving up and going home to tend their crops. He rallied the troops and led them to victory at the battle of Chantonnay in September. However, the odds were long and Rochejaquelein was not invincible and he was defeated at the battle of Cholet on October 17 after which he was forced to retreat across the Loire river.
Nonetheless, in spite of this setback, after the death of d’Elbee he was chosen to be generalissimo of the royalist forces on October 20. The Comte de La Rochejaquelein would seem to some to be an unusual choice for such a high command since he was always a "front-line" soldier. However, he proved his strategic abilities quickly. He attacked toward Granville and captured Avranches on November 12. Granville, however, eluded him and he was forced to re-cross the Loire and retreat to Angers. Pursued and harassed by superior forces under Marceau and Kleber until being caught and defeated piece by piece from December 12-23 where the final blow came at Savenay. However, Rochejaquelein managed to escape and continued to lead a guerilla war against the republican forces until he was killed by revolutionaries on January 29, 1794. After his death his brother Louis carried on the fight until his own death in 1815.
Few other royalist leaders so fit the perfect image of the inspiring, romantic royalist at the Comte de la Rochejaquelein who will be forever remembered for his heroic leadership, his loyalty unto death to cross and crown and for his stirring command, “if I advance, follow me! If I retreat, kill me! If I die, avenge me!”
Posted by MadMonarchist at 1:54 AM