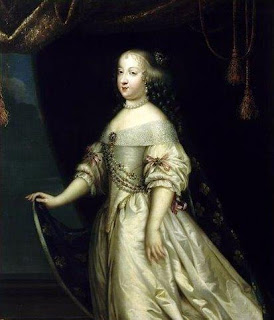 One of the most well known yet over-shadowed consorts of royal history must be Maria Theresa of Spain, wife of the simultaneously marvelous and immoral King Louis XIV of France. She was born Infanta Maria Teresa of Spain at El Escorial to King Felipe IV in 1638 with the blood of many famous Spanish, Austrian, Italian and French royals in her veins. Her mother, Elizabeth of France, died when she was only 6 and though her father adored her she was often neglected by her stepmother. In 1660, after a long series of negotiations, she left Spain and her beloved father in tears to be married to King Louis XIV of France.

At first all was happiness and splendor between Maria Theresa and Louis. The public adored them both; the handsome glorious monarch and his beautiful, devoutly religious wife. However, Maria Theresa’s sweet tooth soon caused her to put on weight and though the king continued to do his marital duty every night he soon began enjoying a long succession of mistresses which greatly distressed the queen and she became more and more withdrawn, comforted by her faith and her collection of dwarves (her ladies in waiting being potential distractions for Louis). However, Maria Theresa was never vindictive and would easily forgive husband and mistresses alike when they sought it of her.

At court, Maria Theresa became very close to her aunt and mother-in-law Queen Anne who had largely been behind the match as a way to bring peace to her two countries of France and Spain. In November of 1661 she gave birth to a son and Spanish musicians played below her chamber to remind her of home though it did nothing to relieve her distress. Nonetheless, within a few months she was pregnant again. In time she would give Louis XIV six children though the King’s infidelities only increased over time. She finally seemed to accept this as a fact of life and stopped complaining, at least so openly about it. It also helped that Louis was always very kind to her, insisted that all treat her with the greatest respect and it was, unfortunately, hardly an unheard of thing. She tolerated Madame de Montespan and even became rather friendly with Madame de Maintenon who actually pushed Louis to give Maria Theresa more attention and for which the Queen was grateful.

Maria Theresa did act as regent on one occasion while Louis was at the front but most viewed her as rather unintelligent. This, however, was more probably due to her reserved and pious nature rather than any real lacking on her part. In 1683 a tumor was discovered under her arm and it quickly became problematic and extremely painful. Her health failed quickly and she finally found relief from her agony when she died on July 30, 1683. Louis XIV said of her death, “This is the first trouble which she has given me”. She was given a lavish funeral, fitting for a woman who had been such a faithful, dutiful and tolerant queen consort.

It should also be noted that Maria Theresa is (possibly) the Queen who actually said, “Let them eat cake” which is often attributed to Queen Marie Antoinette. However, the actual quote was an innocent remark, taken out of context and referred to a simple sweet bread that the peasants usually had plenty of and it was that; not an elaborate frosted cake which would have been eaten by the nobility, to which the Queen referred.
Posted by MadMonarchist at 1:42 AM