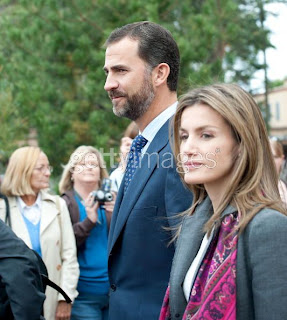 Prince Felipe and Princess Letizia of the Asturias were in Santa Fe, New Mexico on the 6th for the celebration of the 400th anniversary of the city of Santa Fe. The day before the royal couple were in Albuquerque at the Governor's mansion meeting with Bill Richardson and Margarita Zavala. The same day they also visited the new home of the National Hispanic Cultural Center at the Cervantes Institute. It is often forgotten by those in the rest of the country that when the first pilgrims landed at Plymouth Rock the Spanish conquistadors and Franciscan missionaries had already been exploring, preaching and settling in the southwest for more than a hundred years. The area of modern New Mexico was last under Spanish rule during the reign of King Fernando VII in 1821. It was in that year that New Spain became the independent Empire of Mexico under the former Spanish royalist general Agustin de Iturbide.
Posted by MadMonarchist at 2:48 PM