Another hero of the counterrevolution in France, but also one whose career reve 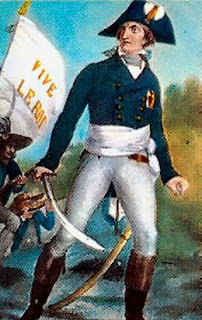 als some of the weaknesses of the movement, was Jean-Nicolas Stofflet. He was born in 1751 to the family of a simple miller and first entered the service of the King of France as a private in the Swiss Guard. Later he worked as a simple gamekeeper for the Comte de Colbert-Maulevrier. He was another of those simple, common men of great loyalty and spiritual strength who were the backbone of the counterrevolution.

When the uprising broke out in the Vendee Stofflet was quick to join and with his prior military experience quickly proved his worth serving under d'Elbee at Fontenay-le-Comte, Cholet and Saumur and emerged as a natural leader in the battles of Beaupreau, Laval and Antrain. His success in the field won him promotion to the rank of major general in the Catholic-Royalist Grand Army. Eventually, he became the deputy commander of the royalist forces and in 1794, with the death of Henri de la Rochjaquelein he became commander-in-chief of the Catholic and Royal Army.

However, the counterrevolutionary forces frequently suffered from a lack of unified command and this became a problem with growing disagreements between Stofflet at another famous general; Francois de Charette. After suffering a string of defeats at the hands of the revolutionary republican forces Stofflet was forced to surrender and signed the La Jaunaie treaty with the National Convention on May 2, 1795. However, as republican crimes continued Stofflet could not remain on the sidelines and by the end of the year he had taken up arms again as marechal-de-camp for the Count of Provence. Unfortunately, his forces were defeated and Stofflet was taken prisoner. A republican military show trial quickly sentenced him to death and he was executed by firing squad at Angers on February 23, 1796. His career had been at times glorious and at times troubled but he fought bravely on the side of right and fell bravely for his deeply held beliefs.
Posted by MadMonarchist at 2:20 AM