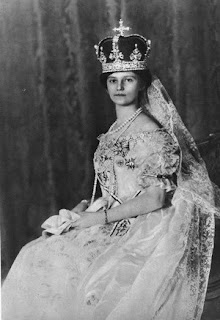 She was born on May 9, 1892, the 17th child of Roberto I, Duke of Parma. in Lucca, Italy. Named after a famous Tuscan saint she was only a child when the unification of Italy dethroned the House of Bourbon-Parma and she grew up moving between family homes in Lucca and Lower Austria. Being from a French royal family, reigning in Italy and forced to spend alot of time on the move they were a very international group and Princess Zita grew up speaking Italian, French, Spanish, German, Portuguese and English. Like all her siblings she was given a strict religious education and was raised to be a devout Catholic where regular charitable work was a family tradition. It was this quality which particularly impressed the young Austrian Archduke Charles who she met during stays in Lower Austria. Charles was smitten right away but for Zita the relationship grew over time before the Archduke proposed for fear she might be married to someone else if he did not act quickly.

On October 21, 1911 Charles and Zita were married with the full approval of Emperor Francis Joseph I. Over the years the couple had eight children and it was a very happy marriage and a very close and happy family. They shared a love of simple pleasures, family life and devout faith. It came as a great shock in 1914 when the murder of Archduke Francis Ferdinand suddenly made Zita wife of the heir to the Austrian-Hungarian throne. Soon after World War I broke out and Charles, a general in the Austrian army, was called to the front. Archduchess Zita was very sorrowful about the war, both because of the risks to her husband, her dislike of Austria's German allies and the fact that her family was split by the hostilities; some fighting in the Austrian army and others (denied permission to fight for France) serving in the Belgian army. When Italy entered the war against the Central Powers some in Austria became suspicious of their Italian archduchess. However, the Emperor was very kind to her, brought her and the children to the palace at Schoenbrunn and often confided in her about his thoughts, concerns and worries about the war and the national situation.

In 1916, when Francis Joseph died, Zita became the last Empress of Austria and Queen of Hungary. She was very involved in national issues and was constantly at her husband's side. When they had to be apart Charles called her several times a day. She also played a major part in 1917 in the effort to make peace. Working secretly through her brother Prince Sixtus, an officer in the Belgian army, messages were sent via Switzerland to try to negotiate a seperate peace between Austria and France. Empress Zita also used her influence to stop a German plan to bomb the residence of the Belgian King and Queen. Unfortunately, the peace efforts went nowhere. King Albert I of the Belgians was in favor but the French and British were not and while Emperor Charles was in favor the Germans were not. The situation became worse when the Allies made the negotiations public which greatly endangered Austria and Charles and Zita in particular. There had never been any love lost between them and the Germans and the news that they had attempted a seperate peace brought threats of a German takeover of Austria.

By the fall of the next year Austria-Hungary was coming apart and Charles and Zita and their family were forced to flee the country to Switzerland. Zita was a great source of strength and comfort to her husband in these hard times and the strain on her had to be great. In 1920 she showed again what she was made of when she accompanied Charles in his effort to regain his throne in Hungary. After both attempts failed the family eventually settled on the Portuguese island of Madeira where Charles died not long after. Empress Zita carried on with the same grace and dignity she always showed, raising her children in royal fashion and never giving up hope for a Hapsburg restoration. The family moved to Spain and later to Belgium. When Engelbert Dollfuss became chancellor of Austria the possibility of a restoration seemed good but all hopes were ended when Dollfuss was assassinated and Austria was occupied by Germany. World War II and the invasion of Belgium forced the family to flee to the United States where two of her sons joined the American army. Empress Zita contributed by raising money in the US and Canada. In 1982 she was finally allowed to return to Austria where she died, still loved and respected by all, in 1989 at the age of 96. Her funeral was attended by 6,000 people, over 200 Hapsburg and Bourbon-Parma royals and a personal representative of Pope John Paul II.
Posted by MadMonarchist at 12:37 AM