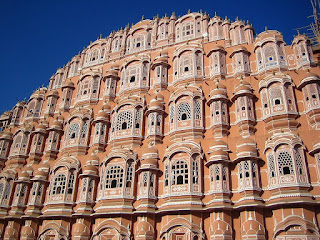 Of the multitude of royal sites of interest in India probably the most famous is the Taj Mahal. My personal favorite would have to be the majestic Mughal palace complex known as the Red Fort. However, one of the less well known but certainly memorable monarchist destinations in India is the Hawa Mahal in Jaipur. It was built in 1799 by Maharaja Sawai Pratap Singh and designed by Lal Chand Usta to resemble the crown of the Hindu god Krishna. Part of the Jaipur city palace it was an embelishment of the Zenana or harem where the royal women lived and this, in part, accounts for the striking face of the palace which was built to allow the ladies of the harem to see out onto the streets below without passersby being able to see in.

Inspired by Mughal architecture it was built in the Rajputana style, five stories tall and made of red and pink sandstone lined with white quick lime. The side facing the street is covered in 953 windows which both keep the inside cool and give the palace its name, the "Hall of the Winds". It is sometimes also referred to as the whispering or singing palace as the brilliant design was built so that the wind blowing through the windows would create a musical sound. Ramps are the only way to reach the upper levels and there is a courtyard inside with 2-story buildings on three sides and another on the east side that is 3 stories tall but only one room wide. It is definitely a sight to see and one of those monuments that, in its style, grandeur and creative design is very uniquely Indian.
Posted by MadMonarchist at 12:19 AM